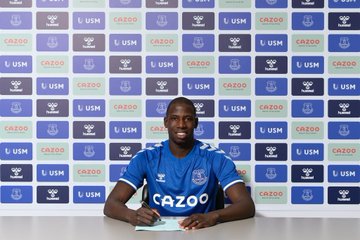 Everton have confirmed the signing of Abdoulaye Doucoure from Watford today.

The 27-year-old midfielder has become the third major signing for the Toffees in four days, following the arrivals of Allan and James Rodriguez, from Napoli and Real Madrid respectively.

Doucoure took to social networking site Twitter to express his reaction after his official move to Everton was confirmed by the club. He wrote:

New step in my career, very happy to have signed for @Everton. Can’t wait to start the new season and achieved all the objective of the club. Come On Blues 🔵🔵 pic.twitter.com/8kRSN3KU1W

According to reports from The Guardian, the midfielder has signed a three-year contract, with Everton having the option on a fourth season.

Doucoure made 129 Premier League appearances in four years at Vicarage Road. Everton have paid in the region of £20m for his signature.

However, his situation has changed after Watford’s relegation to the Championship. Everton have now spent in the region of £60m revamping their midfield this summer.

Carlo Ancelotti will now focus on bolstering his defence. According to reports from ESPN, the Toffees are close to signing the Fikayo Tomori from Chelsea on a season-long loan.

Tomori struggled for game time since the restart after coronavirus. He didn’t play a single minute for the Blues.