Anyone who came to the Etihad Stadium on Sunday hoping to witness a hard-fought, competitive Manchester Derby went home very disappointed indeed. Well, perhaps not the City fans. The Blue Army saw their team put on one of the best performances of the season and thrash the Red Devils 4-1. No Manchester Derbies in recent memory, apart from the 6-1 win for City at Old Trafford in the 2011/12 season, has been as one-sided as this. After going 4-0 up early on in the second half, City took their gas off the pedal, or else it could have been much much worse for David Moyes’ men.

United have a lot of thinking and introspection to do after this mauling, whereas Manuel Pellegrini’s men will look to push on and take control of the title race after making an emphatic statement.

Looking back on this incredible game, here are 5 things we learnt from the Manchester Derby:

1) United’s midfield is as lightweight as can be:

Even with the addition of Marouane Fellaini to the side, Manchester United’s midfield looks incredibly fragile and lightweight. To win the Manchester Derby, they needed to gain some control in midfield. But Yaya Toure and Fernandinho ran Carrick and Fellaini ragged in every area, and dominated proceedings throughout, hardly giving the United duo a touch of the ball in the attacking third. Things got better for United with the introduction of Tom Cleverley late on in the game, but this was after the City players had already sealed the win and dropped a couple of gears.

United may manage to dominate games against some of the lower sides, but against the big boys, they look ordinary. How they could have done with either Cesc Fabregas or Thiago Alacantara in their side at this point!

2) On their day, City are still the team to beat:

There is no doubt about the fact that when Manchester City’s team comes together, it is close to impossible to beat them. Sunday’s performance was one of supreme quality in every area of the pitch, and United didn’t have the single opening until after the game was already lost.

If they can kick on from this victory and maintain this level of performance, they are sure-shot favourites for the title. Inconsistency though, was a big problem under Roberto Mancini, and Pellegrini will have to be weary of complacency.

Man City were undoubtedly buoyed by the news that Robin Van Persie hadn’t made the United squad for the Manchester Derby due to an injury. His replacement was Danny Welbeck, and the Englishman was invisible for most of the game. Wayne Rooney did everything he could to try and gain some control, but he had absolutely no support up front in the absence of Van Persie. Welbeck and Ashley Young were dismally poor, and even Antonio Valencia was unable to get the better of Aleksandr Kolarov, a potential Achilles heel in the City backline.

Arsenal were often accused of being a one-man team in the 2011-12 campaign for their overdependence on Van Persie and now we can say that United aren’t far from being one themselves.

To think that Chelsea spent 50 million on Fernando Torres when they could have gotten Aguero at a cheaper price must still be giving Roman Abramovic nightmares. The Blues missed the chance to sign him from Atletico Madrid in January and just 6 months later, he joined City. He led them to the title that season with the most thrilling goal in the history of the Premier League in the last minute of the last game and is looking to do the same this campaign.

Aguero’s record against United is outstanding and he added two more goals to his kitty against the Red Devils on Sunday. His first goal was one the best we’ll see all season, as he made an incredibly difficult volley look frightfully easy.

Main man: Sergio Aguero was terrific once again in the Manchester Derby

His second season was marred by injuries and inconsistency and yielded only 17 goals in all competitions. It is no co-incidence that City finished the season trophyless. If he can stay fit for the majority of the season and keep scoring on a regular basis, City will be on their way to their second Premier League title.

Less than two months into his job at Old Trafford, David Moyes finds himself under pressure. Taking Sir Alex Ferguson’s legacy forward was going to be no easy task, but 7 points in 5 Premier League games is a terrible record by anyone’s standards. Even though the fixture list hasn’t been kind to them, their performances against Chelsea, Liverpool and City have been below-ordinary, yielding just 1 point in the process. 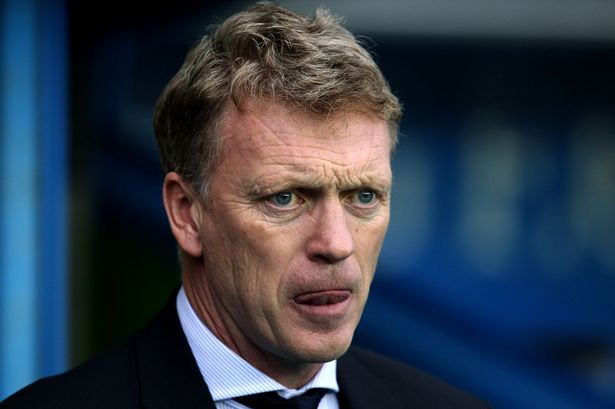 Feeling the heat: Moyes faces some tough scrutiny after United’s poor start to the season

Sir Alex could turn the season around even in such difficult times by stringing together a healthy run of wins, but whether Moyes can do that remains to be seen. Their next 5 games are all against opponents they are expected to beat, and they need at least 12 points out of a possible 15 to stay on terms with those in front of them. Another slip-up though, will land Moyes in more hot water.