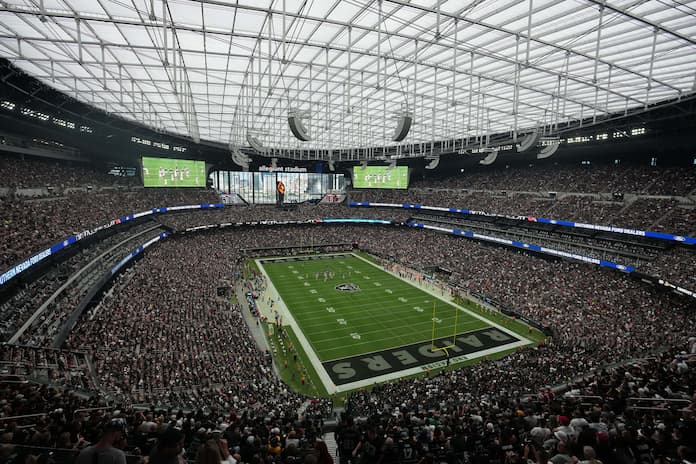 Ever wondered what the most expensive NFL stadiums are and how much they cost to build? Well, you’ve come to the right place. We have compiled a list of the 5 most expensive stadiums in the NFL – including the likes of the AT&T Stadium, Allegiant Stadium and the SoFi Stadium.

So without further ado, here are the five most expensive stadiums that NFL franchises play at and how much they cost to construct.

Counting down from 5 to 1, here are the the five most expensive stadiums in the NFL… 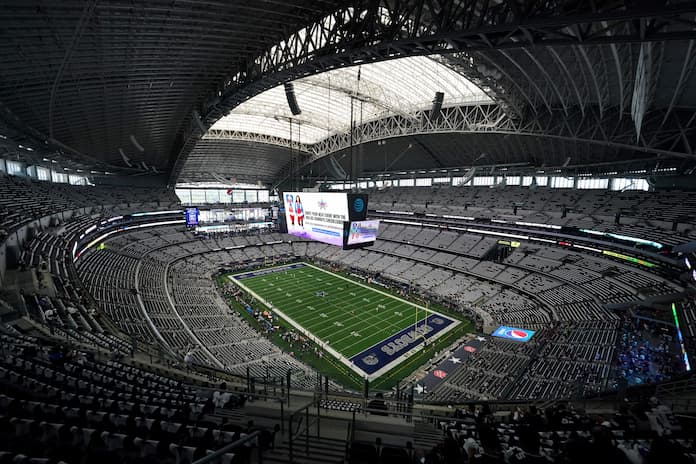 Upon it’s opening in 2009, the AT&T Stadium was certainly the nicest venue in the NFL. The Dallas Cowboys play here and draw high capacity crowds every game they host in the NFL.

As you can see with the capacity, the stadium is expandable up to almost 140,000 people. This is because of a special 660,800 square foot retractable roof that covers the stadium. Not only that, but the roof can be opened or closed in 12 minutes, according to Cowboys owner, Jerry Jones.

The AT&T Stadium has hosted some huge events in the past, including Super Bowl XLV in 2011. It has also hosted some huge College football games, as well as worldwide events such as the WrestleMania.

Massive boxing fights have been held at the AT&T Stadium too, including Canelo vs Saunders in 2021, Spence Jr vs Garcia in 2019 and Pacquiao vs Margarito in 2010. There have also been a plethora of huge artists play here, with the likes of Taylor Swift, Beyoncé, The Rolling Stones, Ed Sheeran and Guns N’ Roses all performing at the AT&T Stadium. 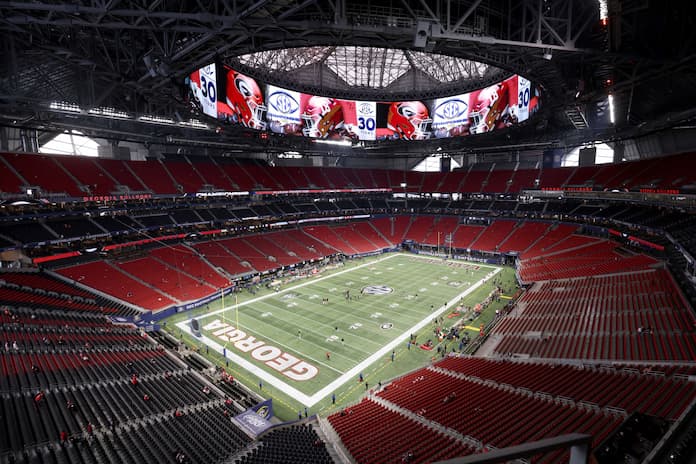 In at number four in the most expensive stadiums in the NFL is the Mercedes-Benz Stadium in Atlanta, Georgia. It is the home of the Atlanta Falcons as well as the soccer team, Atlanta United.

The stadium took 39 months to construct and is over 2 million square feet. It hosted Super Bowl LIII in 2019 as well as many other huge sporting events like College football, College basketball and soccer.

The stadium will host matches during the 2026 FIFA World Cup, making it one of the 11 venues across America to be used. Huge recording artists such as Ed Sheeran, Kanye West, Metallica, The Rolling Stones and Jay-Z have performed here.

Again, it comes as no surprise to see the Mercedes-Benz Stadium in the top five here, given it was only constructed five years ago and cost an extortionate amount of money to build. 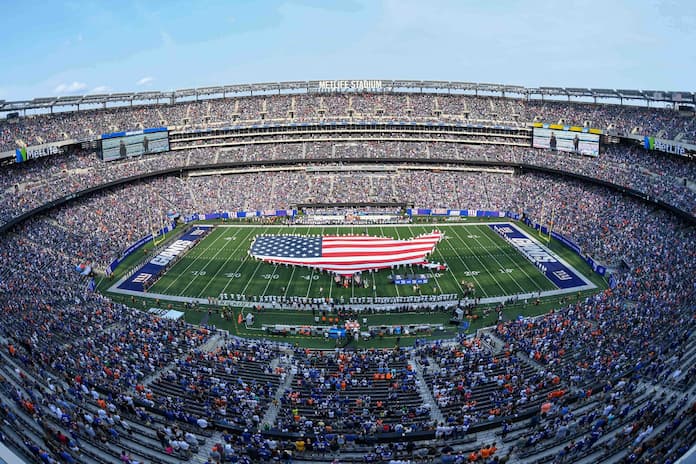 In at number three is the MetLife Stadium, which was opened in 2010 as a replacement o the nearby Giants Stadium. It has the largest capacity in the NFL and is situated in East Rutherford, New Jersey.

Like all of the stadiums on this list, some huge music names have performed here, such as Bon Jovi, Taylor Swift, Bruce Springsteen and U2. The stadium is also expected to host the Final of the 2026 FIFA World Cup.

The MetLife Stadium was 100% privately funded, using both MetLife’s $20 million annual sponsorship payments as well as debt owed. This extraordinary stadium played host to Super Bowl XLVIII back in 2014, and it sure won’t be it’s last time hosting the biggest sporting event in the world.

It has hosted huge lacrosse games, as well as both WrestleMania 29 and 35. Plenty of soccer games have been hosted here, as well as College football and of course Monster Jam.

In at number two and missing out on top spot is the incredible Allegiant Stadium in Las Vegas Nevada, home of the Las Vegas Raiders. The $1.9 million dome was built using a combination of both private and public funds specifically for the Raiders, who moved from Oakland to Las Vegas in 2017.

It is no surprise to see it come in so high on the list of the most expensive stadiums in the NFL. The stadium is scheduled to host Super Bowl LVIII in February 2024, which is sure to be a sensational spectacle at a stadium as great as this one.

There have of course been some huge events hosted here at the Allegiant Stadium since it opened in 2020, including massive soccer, football and professional wresting. It hosted SummerSlam in 2021, when John Cena fought Roman Reigns in the main event.

Some huge musical icons such as Elton John, The Weeknd, Garth Brooks and the Red Hot Chilli Peppers have performed here. Keep an eye out for other huge recording artists who will no doubt play here in the comings years. 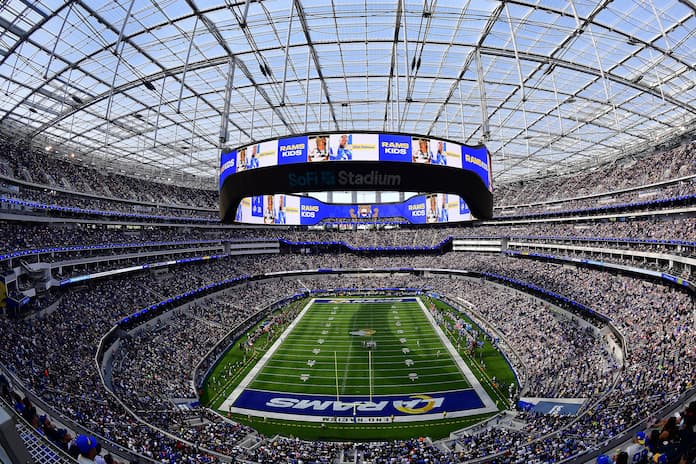 Last but certainly not least, in at number one in our list of the most expensive NFL stadiums is of course the Sofi Stadium in Inglewood, California. Both the LA Rams and LA Chargers play their home games here in the NFL.

This magnificent stadium was opening just two years ago, and it isn’t being over the top in calling it the nicest sports complex in the world. It has a roof so can host both indoor and outdoor events, has a capacity of 70,000 which is of course expandable to over 100,000 if and when necessary.

Despite just being opened in late 2020, SoFi Stadium has been selected to host some of the most prestigious sporting events already. The 2028 Olympic Ceremonies and College Football Championship in 2023 are all set to take place at this magnificent venue, as well as Super Bowl LVI being hosted here earlier in 2022.

The stadium will play host to some of the 2026 FIFA World Cup games too, as well as potentially being consider amongst the cities to host the 2031 Rugby World Cup. WrestleMania 39 is also set to be hosted at the SoFi Stadium in 2023.

The who’s who of the music industry have performed here since it’s grand opening two years ago. Some names include Justin Bieber, Paul McCartney, The Weeknd, Eminem, Kendrick Lamar, Dr. Dre, 50 Cent and Snoop Dogg.

There is absolutely no surprise at all to see this state of the art stadium land at number one of our list of the most expensive stadiums in the NFL.