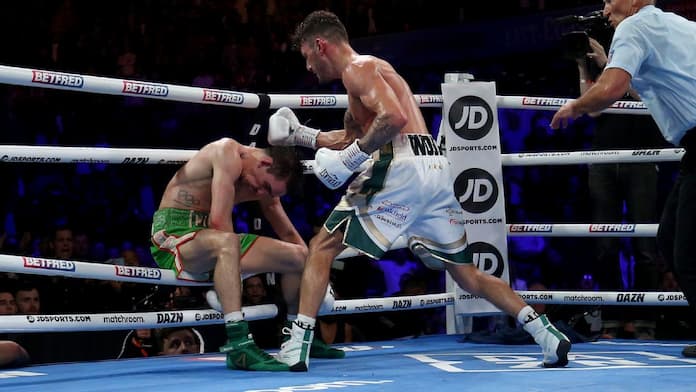 With just a few months left of the year, we though it would be a good time to outline the five best boxing knockouts of 2022 so far. These five knockouts were some of the most eye-catching, mouth-watering, insane knockouts you are ever likely to see.

The list includes the likes of Naoya Inoue, Gervonta Davis and of course Leigh Wood. So without further ado, here are the five best boxing knockouts of 2022 so far.

5 Best Boxing Knockouts Of The Year So Far

Counting down from 5 to 1, here are the the five best knockouts of 2022 so far in the sport of boxing…

In at number five on our list o the best KO’s of 2022 is Gervonta Davis’ knockout of rival Rolando Romero in the sixth round of their WBA World Lightweight Title fight on May 28.

The fight took place at the Barclays Center in Brooklyn, as ‘Tank’ aimed to defend his world crown against the mouthy, big-talking ‘Rolly’. Romero’s talk turned out to be cheap, as David landed an exquisite straight left hand count punch from the southpaw stance as Romero was coming in, sending him tumbling to the canvas and hanging on the ropes.

Romero tried his best to get up and carry on from the heavy knockdown, but there was no way he could continue as ‘Tank’ celebrated the 25th knockout of his career in just 27 fights.

In at number four and possibly a surprise inclusion in terms of pedigree of the fight and the level of the bout is John Ramirez’s emphatic knockout over Jan Salvarierra.

Neither of these men are massively known in boxing circles, but after this insane KO, Ramirez’s stock has most certainly risen. ‘Scrappy’ is now 10-0 and boasts eight knockouts, and this is the pick of them all.

The vacant NABA Super-Flyweight Title was on the line, and it took the 26-year-old just 2.25 on the clock to secure the belt and earn himself an highlight reel knockout. Ramirez was pouring the pressure on Salvarierra and landed a sweet straight right hand down the pipe, sending the Mexican tumbling through the ropes and out onto the floor at ringside.

Embarking on the top three knockouts of the year so far, and this one most certainly deserves to be right up near the very top. We are of course talking about Naoya Inoue’s demolition job and outstanding KO of Nonito Donaire in their rematch for the IBF, WBA-Super and WBC World Bantamweight Titles.

‘The Monster’ has 20 KO’s in his 23 victories, and is a frighteningly heavy handed boxer for someone weighing just 118-pounds. The first fight between Inoue and Donaire was a close one back in 2019, but the Japanese superstar didn’t mess about in the rematch as he emphatically stopped the Philippines boxing legend in the second round after a barrage of heavy punches.

The 29-year-old wobbled Donaire heavily with a left hook early in the second round, before continuing his onslaught and cornering the multi-weight world champion. Inoue then landed a sensational one-two down the pipe, before clipping the jaw of Donaire with a left hook after which sent the 39-year-old wilting to the canvas and unable to continue.

A sensational knockout from one of the hardest punchers pound-for-pound in boxing and certainly worthy of kicking off our top three knockouts of 2022.

In at number two and perhaps unlucky not to claim top spot is Joe Cordina’s one punch obliteration of Kenichi Ogawa. What make’s this knockout even more special is that Cordina isn’t necessarily seen as a big puncher, it was in his hometown of Cardiff and it was his first shot at world honours.

Ogawa was a two-time super-featherweight world champion, and the current holder of the IBF crown, but Cordina ripped it right from his grasp with a sensational second round KO of the Japanese boxing hero.

The punch was perfect. The Welshman fainted the jab to the body, lowering the hands of Ogawa, before firing a perfectly timed overhand right which landed right on the button of Ogawa’s chin and sent the long-reigning champion to the ground, staring up at the ceiling.

Quite worthy of number one spot in most cases, if it wasn’t for the magnitude and storyline of our number one selection.

Coming in at top spot and lifting the SportsLens title for the best knockout of 2022 is Leigh Wood’s unbelievable last-gasp KO in the 12th an final round against Michael Conlan.

The fight was in Wood’s hometown of Nottingham, with the arena packed out to see their hero make the first defence of his WBA World Featherweight Title against the Irishman.

The fight couldn’t have started much worse for ‘Leigh-thal’, who got dropped in the very first round and was up against it from the get go against the Irish boxing amateur star. Round by round the fight continued to get worse for Wood, with Conlan out-boxing the Englishman and picking up each round comfortably.

The tide began to turn in the last third of the fight, when it was clear that Wood needed a knockout if he was to retain his world title. Conlan began to tire, and Wood came on strong, winning a couple of rounds before securing a knockdown of his own in the 11th round.

Despite the knockdown, Wood still needed a KO in the final round of the fight or else Conlan would be travelling back to Belfast with the WBA belt. The 12th round was quite remarkable, with Wood throwing everything at Conlan, who was visibly tired and just trying to survive the final three minutes.

With just 1.44 left on the clock, Wood emphatically knocked Conlan out, sending the Irishman folding through the ropes and onto the floor at ringside. The Nottingham man landed a sensational right hand right on the temple of Conlan, with the Belfast man clearly out on his feet as he fell back through the ropes.

This knockout comes in at number one due to the sheer comeback from Wood. The fact he had been on the deck himself and was miles behind on the scorecards, before securing a last-gasp one punch KO, secures number one spot for the 34-year-old.