The newest sensation in English football is Jurgen Klopp’s Liverpool. Aside from the hipsters’ favourite Jamie Vardy and the annual phenomenon of Arsenal’s injuries, Klopp’s Liverpool have been a constant feature of recent newspaper columns and a treat to the ever-proliferating analysts and opinion-formers within the game.

While it’s been barely two months since Klopp took the reins at Anfield, the narrative at Liverpool has altered significantly. From the malaise that had set in during the last days of Brendan Rodgers’ reign to the positive enegy emanating from Anfield at the moment, a lot has changed since Klopp signed on the dotted lines.

Liverpool have been in good form with Klopp at the helm, and results have been emphatic with the Reds’ last three away games in English soil yielding 13 goals and three wins at seemingly difficult places at Chelsea, Manchester City and Southampton. Liverpool under Klopp are currently in rampage, losing just once in the German’s 11 games in charge.

There have been marked improvements, both technically and psychologically, and the players have quickly taken to Klopp’s methods which include pressing the opposition from the front and quick transitions. Their midweek humbling of Southampton in the League Cup showed another facet of their recent resurgence: their ruthlessness. Liverpool scored six goals from only seven shots on target, a remarkably high efficiency.

Aside from the newer technical aspects and the ruthless efficiency which comes with better confidence levels, Klopp’s Liverpool have also been helped by a consistent selection of personnel, as well as a boost in morale. Here we list the four reasons why Liverpool have been dominant under Klopp.

1. Pressing From The Front

The improved intensity of pressing has been evident in Liverpool’s patterns of play under Klopp. Their pressing patterns have been distinctly different under Klopp than that under Rodgers, with defensive actions and possession recoveries effected higher up the pitch. The much-vaunted Gegenpressing is yet to be fully implemented, but the structures seen thus far under Klopp show Liverpool are slowly on their way to becoming a proper Klopp team, a la his previous Borussia Dortmund side.

Comparing Liverpool’s two away games in Manchester this season, which ended in a 3–1 loss to Manchester United under Rodgers and a 4–1 win at Manchester City under Klopp, the differences in the number of defensive actions are evident. At Old Trafford, Liverpool were more passive while at Eastlands, the Reds were proactive from the off and forced City into defensive mistakes. 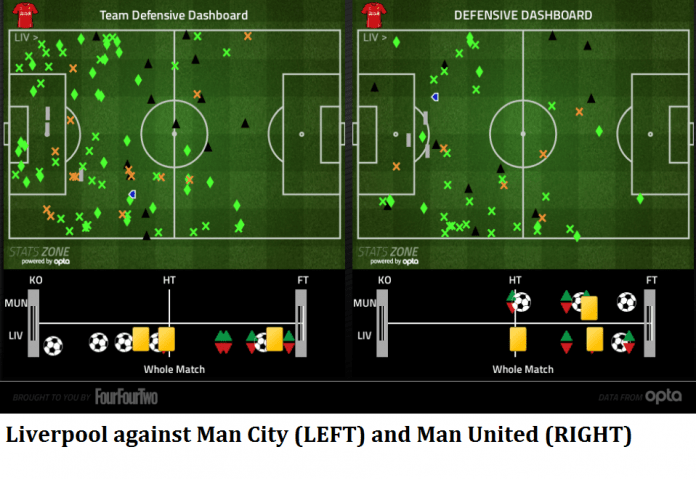 Another noteworthy feature of the Reds’ game seen early into Klopp’s reign has been the high block pressing. Although slightly inconsistent, Liverpool are clearly on their way in adjusting to a style that hinders their opponents’ build-up play, and forces them to bypass the initial phases and go for long balls. A comparison of their ball recoveries in their 3–1 win over Chelsea under Klopp and the 1–1 draw under Rodgers at Everton clearly shows the differences in approach. 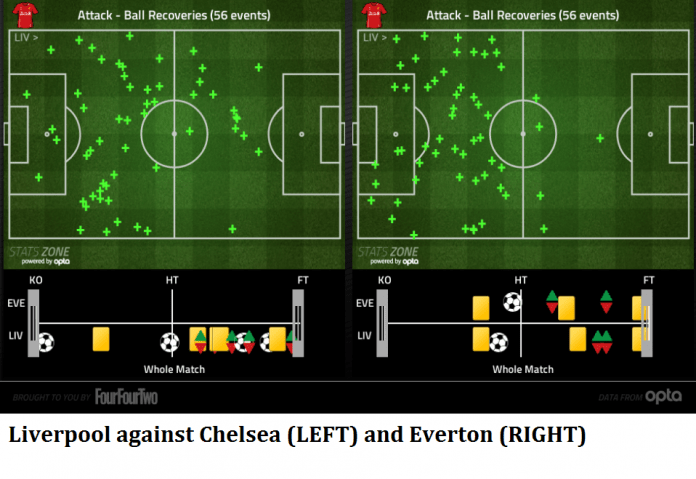 Liverpool have conceded more than one goal only once under Klopp, and one of the key reasons behind their good defensive form is their consistency in personnel selections. Only once have the Reds changed their back four under Klopp, and that too due to an injury suffered by Mamadou Sakho in the Crystal Palace game which they lost. It can also be said the Reds lost that game due to the enforced defensive reshuffle.

Martin Skrtel, Nathaniel Clyne, Alberto Moreno and Simon Mignolet have been ever-presents in the Reds back line under Klopp, with only Dejan Lovren coming into the side recently replacing Sakho. The consistency in defence is a far cry from the frequent formation changes and variable personnel selections under Rodgers.

Often, Emre Can played as the right-sided centre-back, while the two full-backs, Clyne and Moreno, were deployed as wing-backs. Rodgers fancied a centre-back, Joe Gomez, at left-back while the specialist left-back Moreno warmed the bench. Klopp’s arrival has offered balance and stability to the team, and results are there for all to see.

Liverpool’s attacking structures under Klopp have changed significantly. While the six goal drubbing of Southampton was a freak result which shouldn’t happen too often, their patterns in attack had similar orientations like in the previous games under Klopp. While Mignolet to Christian Benteke was the preferred build-up route under Rodgers, Klopp’s Liverpool are more elaborate in their build-up play.

Triangles are the preferred modes of bypassing opponents’ midfield press, and the full-backs are heavily involved in the build-up phases. Liverpool opted for a midfield diamond against Southampton with two strikers up top but Daniel Sturridge was repeatedly seen dropping short in the initial stages to disrupt Saints’ defensive shape and to help progress the ball into higher areas.

The fact Sturridge’s two goals at St Mary’s came from his movements on the shoulders of the last defenders showed another aspect of Liverpool’s variable attacking movements. Sturridge dropped short but also popped up in behind the centre-backs to score the goals. Such variable final third movements have been a feature of Liverpool’s attacking play under Klopp.

The bounce of a new manager has become somewhat cliched in recent times and while Liverpool are seemingly still not over their Klopp bounce, it has to be said the German’s arrival has had a positive effect on a few player who started fading under Rodgers. Both Adam Lallana and Moreno were signed by Rodgers last season amid much fanfare but a season on, they had barely established as key players under the Ulsterman.

So much so that the Reds brought in another creative midfielder in the summer window in Roberto Firmino, a player somewhat similar to Lallana, and used the teenager Gomez over Moreno, who is a more accomplished left-back. But since Klopp’s arrival, which also coincided with the unfortunate long-term injury to Gomez, Moreno has started in ten of Liverpool’s 11 games. It can be argued the Reds’ lack of proper back up to the Spaniard has been to his advantage, but the lift in Moreno’s performance has been evident.

“I feel he [Klopp] trusts me. He spends a lot of time with me. I think it shows up in good performances on the field. He really wants me to learn English as quickly as possible so he can get his ideas over,” said Moreno of Klopp. That the 23-year-old has been so effusive in his opinion of his manager in these early days of his reign clearly demonstrates the impact the German has had on Moreno.

And so does Lallana, who said of Klopp: “We listened to the manager and I was so pumped by what he’d said — the vibe, the emotion and the feeling — I walked out wanting the game to start there and then, in that second.

“It was just the passion of his words that got to us.

“He really is brilliant to listen to. He seems to have an off-the-cuff way about him. He just goes with the flow and it’s all genuine. There is no ego but an abundance of charisma and an aura.”

The cases of Lallana and Moreno are a microcosm of the whole situation at Liverpool, and it has reflected on their recent results. One doesn’t score four goals for the first time at Manchester City’s home for the first time in 12 years without the confidence Liverpool have exuded, or put six past a strong Southampton side at St Mary’s which hasn’t happened for 20 years.