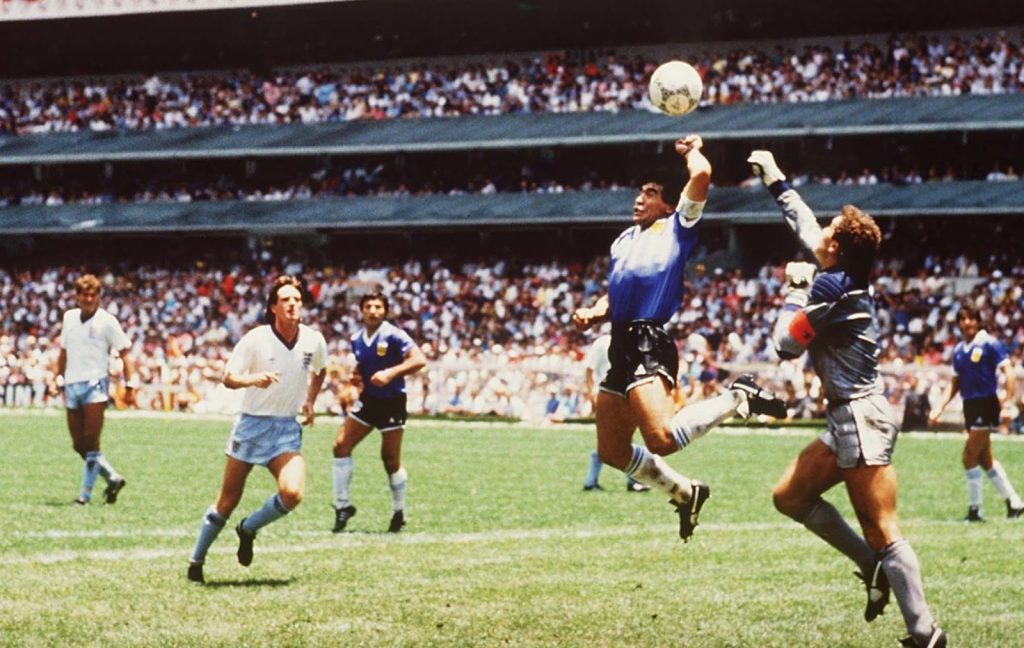 Whatever happens in the 2018 World Cup, it’s going to deliver some memorable moments that we’ll no doubt look back on in years to come. To whet the appetite, here are 25 of the greatest moments in World Cup history – how many of them do you remember?

Maradona climbs higher than England goalkeeper Peter Shilton but punches the ball in with his hand to give Argentina a vital lead in the quarter-final.

Late in the quarter-final against Argentina, Frank de Boer pinged a long ball forward, Bergkamp pulled the ball out of the air with a sublime touch and then steered it into the net for a beautiful Netherlands winner.

With England 3-2 up in the final, Hurst races away on the break to slam in a glorious, match-winning fourth and seal his hat-trick. What’s the betting England can win it again? Unlikely, according to odds on the World Cup with williamhill.com, Unibet, Betway and all, but you never know…

Brazil’s lowest ever moment in World Cup history saw a humiliating 7-1 defeat to Germany in the 2014 semi-final. Germany were five goals up within half an hour.

Extra time in the semi-final between West Germany and France, and French sub Patrick Battiston runs through on goal. German goalkeeper Harald Schumacher races out to meet him, and simply clatters into him, late. Battiston was knocked cold, lost teeth, broke ribs and damaged his back. Schumacher wasn’t even booked.

At 18 years old, Owen scores a stunning goal against Argentina in the second round, surging past defenders before crashing it into the net.

In the final seconds of the game against Sweden, a Brazil corner was headed in by Zico for what would have been the winner – only for referee Clive Thomas to blow the final whistle with the ball in mid-air.

Tardelli screams the stadium down, 1982

Italy’s Marco Tardelli scores his team’s second in the ‘82 final against West Germany and delivers one of the World Cup’s iconic celebrations, screaming in wild-eyed delight.

Opening matches don’t come more dramatic than this one in 1990, when Cameroon caused a sensation by beating reigning champions Argentina 1-0, despite two red cards.

Roberto Baggio had done so much to drag Italy to the World Cup final but missed a crucial penalty in the shoot out, sending the ball as high as it’s humanly possible to do so. Heartbreaking.

The 2002 World Cup saw plenty of surprising results but none more surprising than South Korea beating Italy in the second round.

England had stuttered in the ‘86 finals until Gary Lineker scored a superb hat-trick in the final group match, against Poland.

The first golden goal in World Cup history was scored in 1998 by Laurent Blanc, sending France through to the last eight at the expense of Paraguay.

With the match between England and Argentina delicately poised, David Beckham is sent off for flicking a boot out at Diego Simeone after he’d been fouled.

Trailing Germany 2-1, Frank Lampard’s shot hits the crossbar, bounces down and away – but although it’s clearly over the line by some margin, no goal is given and England are denied an equaliser.

Crazy scenes in the 2010 final, as Dutch midfielder Nigel de Jong launches into a chest-high challenge on Spain’s Xabi Alonso. How he escaped with a booking is anyone’s guess.

After the controversy surrounding his performance in the ‘98 final, Ronaldo wins the 2002 final for Brazil with two goals against Germany.

Scotland’s Archie Gemmill earns a place in World Cup folklore with a quite stunning solo goal as the Netherlands – later beaten finalists – are defeated 3-2.

In the searing USA heat, the Republic of Ireland shock Italy by beating them 1-0, thanks to Ray Houghton’s early goal.

Possible the biggest shock in World Cup history, the USA beat England 1-0 with the only goal coming from Joe Gartjens. Rumour has it many misread the scoreline and assumed it was 10-1, such was the feeling of disbelief.