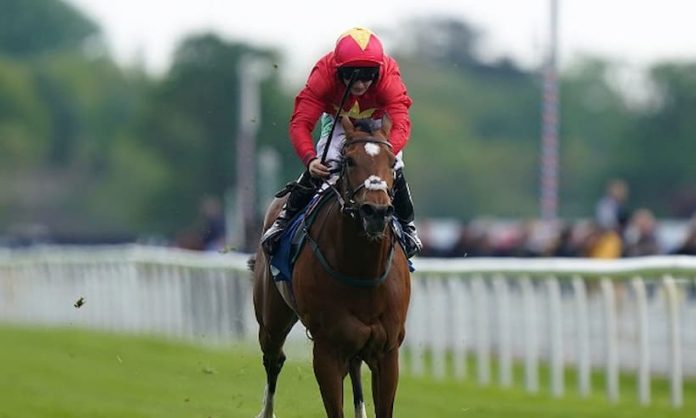 The 2022 Nunthorpe Stakes, on the third day of the York Ebor Festival, saw an array of fillies dominate the head of the betting. One of those females – Royal Aclaim – had been popular in the build-up to the race – however, it was two more of the ladies  – Highfield Princess and The Platinum Queen – that led home a 1-2 in the Group One sprint to fly the flag for ‘Girl Power’.

Draw 14 might not have looked ideal for Highfield Princess before the race, with 18 of the last 20 Nunthorpe Stakes winners coming from stalls 11 or lower, but the John Quinn-trained 5 year-old has another big stat on her side – the fact she’s a filly!

This race has thrown up seven winning fillies in the last 11 renewals and with the market dominated again by the ladies it was odds-on to be more ‘girl power’ on the Knavesmire this year.

However, all eyes were on the top two fillies in the market – Royal Aclaim and The Platinum Queen – but there were also a few decent girls lurking just behind in the betting, including HIGHFIELD PRINCESS, who punters latched onto in the hours before the race and went from 8/1 into 5/1.

That market support proved well-placed, as despite the lightly-weighted The Platinum Queen blasting out and setting a scorching pace, her greeness showed in the closing staged – wandering around – which allowed the versatile HIGHFIELD PRINCESS to pounce.

The John Quinn-trained 5 year-old came with a well-timed run off the pace to pick off the crabbing The Platinum Queen and eventually powered clear to beat her fellow filly by an impressive 2 1/2 lengths.

Not much else ever really got into the race, with last year’s runner-up Emaraaty Ana running on late to take bronze this year to make it a 1-2-3 for the Yorkshire-based stables, with recent King George Stakes winner, Khaadem, back in fourth.

Last year’s winner – Winter Power – trailed in last of the 15 – while the much-touted Royal Aclaim ended a fair sixth and being lightly-raced is sure to have learned a lot from that and isn’t one to dismiss in the coming seasons.

The win for Highfield Princess also provided trainer John Quinn with his first domestic Group One, after she won the Maurice de Gheest last time out at the highest level in France.

The John Quinn 5 year-old is a joy for connections as Highfield Princess this season she’s showing her owners that he’s certainly not a ‘one-trick pony’ when it comes to her best trip. She’s now won over 5f, 6 1/2f, 6f and even 7f during her last five races – a blend of speed and stamina is a fine asset for any racehorse to have and although she’s unlikley to race beyond 7f, this ‘trip superpower’ gives her many options going forward (see below some possible targets).

A Gutsy Effort From The Platinum Queen To Take Silver

Hollie Doyle and The Platinum Queen blasted out the stalls and with a featherweight it was always going to be hard for the others to reel her in. She had upwards of 22lbs in-hand from the rest with her 2yo allowance and that was a big advantage – se was trying to follow Kingsgate Native (2007) and Lyric Fantasy (1992) as past 2 year-old winners of this race.

That almost proved to be right as her light burden saw off 13 rivals, but not Highfield Princess. She also ran about a bit in the closing stages, to show her inexperience, but it was still some performance from a 2 year-old and the Richard Fahey camp will have plenty to look forward to with her in the coming seasons.

Why not snap-up a FREE £60 bet with BetUK to use on at the races at York this week?

Where Next For Highfield Princess?

Being a sprinter that isn’t tied to just one trip then the John Quinn yard will be licking their lips as to her next assignment – as mentioned she seems just as good from 5f up to 7f.

At this stage she’s got entries in the Haydock Betfair Sprint Cup (3rd Sept) @ 7/2 with BetUK, the Curragh Dubai Flying Five Stakes (11th Sept) and also the Ascot Champions Sprint Stakes (15th Oct) @ 5/1 with BetUK – they are all Group One level races.

The Prix de l’Abbaye on Arc day (2nd Oct) is another race being talked about, while she could also head over to America if she wanted – all Group One winners from this week’s York Ebor Festival will receive and automatic invite to the Breeders’ Cup (5th Nov) – watch this space!

Already Have Accounts With Our Featured Bookies? Here Are 10 Up-and-Coming Bookmakers With Cracking Free Bets

See below our list of some of the top horse racing betting sites – but totally trusted bookmakers, that will also have prices ahead of today’s horse racing. Plus, best of all, they ALL also have ‘must-see’ free bet sign-up offers to take advantage of and by joining this will give you a bigger range of bookmakers so you can get the best value when placing your horse racing bets.