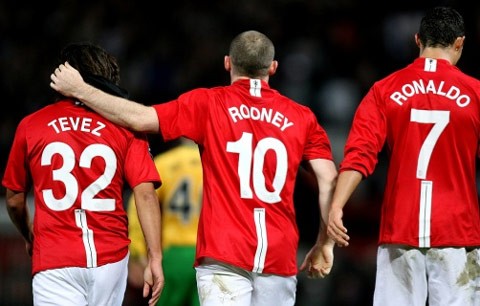 Everton were hosting Arsenal at Goodison Park. The score was 1-1, Arsenal were on a 30-game unbeaten streak and Everton’s owner, Bill Kenwright, had left the stadium with two minutes to go. Arsene Wenger’s 31st consecutive unbeaten league game seemed to be on the way, thanks to an 8th minute opener from Freddie Ljungberg.

With barely a minute left, Everton’s Gravesen hooked it upfield for a 16-year old striker who’d been subbed on with ten minutes to go. The teenager brought it down with expert control, twisted around and, from 30 yards out, sent in a blistering curler. It looped over David Seaman, the Gunners keeper, and thwacked in off the underside off the bar, with 28 seconds left in the game. Five days before his 17th birthday, an 80-pounds-a-week teenager had grabbed the title of the youngest Premier League goalscorer, and toppled the mighty Arsenal off the top of the table. 13 years down the line, Wayne Rooney is the 300k-pounds-a-week captain for Manchester United, and has won five Premier League titles, two League Cups, a Club World Cup, the Champions League, and 27 individual honours, including 8 PFA titles. He is the all-time topscorer for England, and is third-highest goalscorer for Manchester United, just 13 goals shy of breaking Sir Bobby Charlton’s record of 249 goals for the club.

And yet, the ex-Everton man cannot claim legendary status the way contemporaries with lesser goal tallies or titles can. Once tipped to be one of the most phenomenal players of the game, and the imminent top-scorer for the club, Rooney will probably not make it to even the top five of most fans’ club favourites list. No other player with numbers like his will ever divide opinion the way he does. Sir Alex wanted him gone towards the end of his tenure, his own fans booed him in 2013, and for all his numbers and titles, he very often looks anonymous in games, failing to exert control over proceedings with the consistency players of his stature ought to do. The two club-scorers ahead of Rooney, Denis Law and Bobby Charlton, once formed a part of United’s ‘holy trinity’, with George Best as the third member – all of them crowned European Player of the Year during their time at United. Their statues stand tall outside Old Trafford, they had helped United become the first English club to win the European Cup in 1968. Rooney has not and will not win a Ballon d’Or, and he probably will never have a statue for his own, either. He will never be regarded in the same league as the holy trinity or legends like Giggs and Scholes.

There are reasons why, but though they offer an explanation for the controversy and divisiveness, they fail to provide a a crystal-cut marker as to controversy surrounding Rooney’s status as a footballing legend.

Perhaps one reason why fans fail to love him was his desire to leave for arch-rivals Manchester City in 2010. It showed a lack of commitment and loyalty to the club, a mercenary desire to move on which infuriated the entire United community. Legends care for the club, the argument goes, and Rooney was selling himself to rivals. Or perhaps it is because of his roots. The ex-Evertonian speaks with a Liverpudlian accent, and the historic rivalry between United and Liverpool is well-known. Some ‘offences’ are unforgivable.

Or perhaps, as Gab Marcotti would say, a much simpler reason is because after all his initial promise, he ended up being only outstanding, not extraordinary. He ended up being a team player instead of an individually motivated one. He isn’t the type of player who will dribble past five and score a scorcher every game – that was Ronaldo. He isn’t the kind of player who will gain respect through utmost loyalty to the club – that was Giggs. He isn’t a flair player like Best and he isn’t a charismatic influence like Cantona.

Goals, titles, longevity, loyalty, individual moments of brilliance – these are things that make legends. Rooney, though having his fair share of all of the above, cannot really be defined by the above. He is a team player, and one of the best of his kind. Other players of his potential  would have been selfish and chosen a position of their own to flourish in – Rooney was a victim of his own versatility. Throughout his United career, he was shifted and shunted all over the pitch, playing second fiddle to the Ronaldos and Berbatovs and Van Persies. Central midfield, wings, in the hole, everywhere but his favoured position up front, and he complied, to great effect. In the process, he ended up failing to be the striker he could have if he had stuck to the 9 throughout his career. This is the age of quick judgements, when errors are pounced upon and magnified, events are sensationalized and interpreted to suit click-bait needs and opinions of papers and pundits flicker like a candle-wick flame in the breeze. For all the lack of loyalty that Rooney is accused of, the fanbase and the media are guilty of it, too. Only time will be a measure of his greatness – maybe someday we will look back and admire and appreciate what he did for both club and country.

As of now, though, he is on of his poorer runs of form. Poorest, in fact – he has gone 11 Premier League games without scoring. He will score, eventually, but he looks like he is past his peak – lacking pace, guile and threat. One may argue that LVG’s necessity to keep the dressing room on his side is what forces him to keep him captain week in and out. Anthony Martial, the new revelation at Old Trafford, has scored 4 in less than 100 minutes.

Perhaps Rooney will have to play the trademark second fiddle to the young Frenchman, too. He will do it, without complaints, and he will continue to do so as long as he is required to. Perhaps that is the biggest complaint one can hold against him – that in order for the team to flourish, he sacrifices his personal growth. That he was and is content with the outstanding, and never made it to the extraordinary.

Or perhaps, that is what makes him extraordinary.