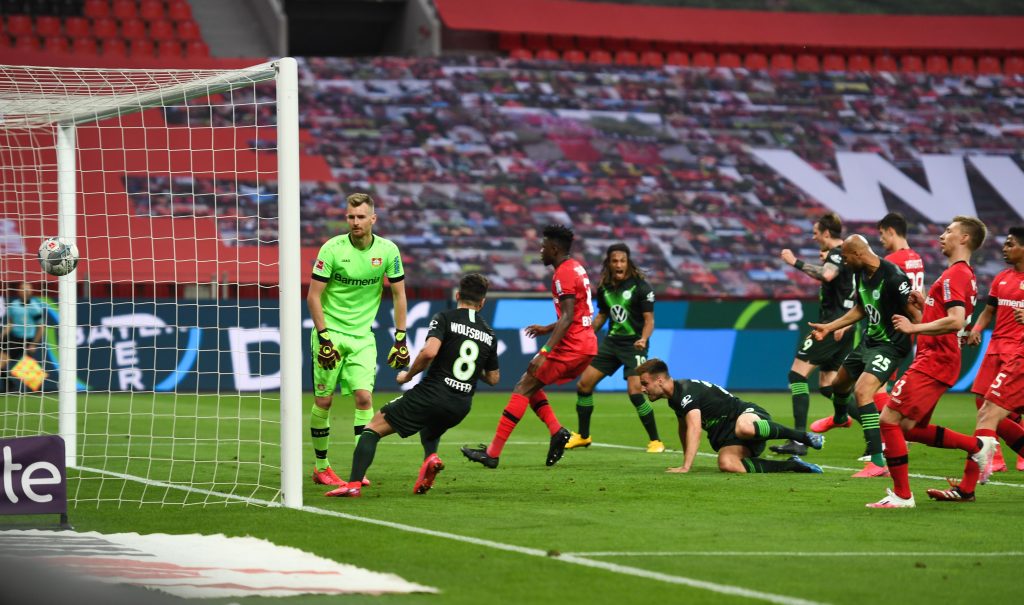 Leverkusen welcomed Wolfsburg to the BayArena for the first match there after the Bundesliga restart.

Wolfsburg were the better of the two sides in the first half, even though they had far less possession.

They got their reward when Pongračić headed in Arnold’s free-kick.

In the second half, Wolfsburg got a lucky second goal, as Arnold’s free-kick took a massive deflection on its way to goal.

Victor then set Steffen up for a third, and the win seemed sealed for Wolfsburg.

Pongračić scored another header after almost a mirror free-kick from Arnold, to make it four.

Leverkusen got a late consolation through Baumgartlinger, but that was all for them.

The match ended 1-4 to Wolfsburg, who were by far the better side.

Leverkusen switched to a back 4, as opposed to the back 3 they deployed for their last two matches.

However, this change backfired, as they were nowhere near as good as they were in the previous matches. Despite dominating possession, they couldn’t create anything substantial.

Therefore, in the second half, Leverkusen switched to a back 3. But their defending only worsened thereafter as they conceded 3 more goals, so the change was unsuccessful.

Diaby vs Mbabu – Mbabu did very well to contain Diaby for most of the match, and he was also able to make attacking runs, complete with a few dangerous crosses.

Lukáš Hrádecký – Made a number of great saves, but couldn’t possibly stop the goals. Despite conceding 4, he was perhaps Leverkusen’s best player. 7.75.

Mitchell Weiser – Solid at the back, as he repelled all the long balls which came his way. 6.75.

Sven Bender – Had a decent match, as he kept the Wolfsburg forwards in check. 6.5.

Edmond Tapsoba – He was good at the back, as he made lots of crucial blocks and challenges. 7.

Wendell – He was good down the left flank, as he contained Steffan. 6.

Charles Aránguiz – He was industrious in midfield, but failed to do much in terms of attacking. Did well to adapt to a more defensive role in the second half. 6.5.

Kerem Demirbay – He couldn’t make much happen in terms of attack. In midfield too, he was bossed by Arnold. 4.

Karim Bellarabi – Not a great match for him, as he was largely uninvolved for most of it. 4.5.

Nadiem Amiri – Lively early on but faded afterwards. Grew back into the game in the second half. 5.75.

Moussa Diaby – He threatened with his pace early on, but was subdued thereafter, and couldn’t get into any one-on-one situations. 5.75.

Kai Havertz – He was frustrated throughout the match, as he was contained by the Wolfsburg defence. 5.5.

Aleksandar Dragović – Not great at the back after he came on. 4.

Julian Baumgartlinger – Not a great game for him, as he was nowhere near as good as Arnold and Schlage in midfield. Did well to get a late consolation goal, though. 5.5.

Florian Wirtz – He was very lively when he came on, and threatened down the right. 6.5.

Team – It was a shambolic display from Leverkusen. The new system with 4 at the back completely backfired, as they shipped 4 goals, and only managed a late consolation after being second-best for most of the game. They need to improve if they want to be a Champions League side next season. 4.5.

Koen Casteels – Made the saves when he had to, but largely not required. Couldn’t possibly have saved the goal though. 6.75.

Kevin Mbabu – Strong performance from the Swiss international, as he did very well to contain Diaby. Involved in the attacks as well. 7.

Marin Pongračić – Got his first-ever Bundesliga goal with the header from Arnold’s free-kick. Made it a brace from almost a mirror free-kick. He was great defensively as well. 7.75.

John Brooks – Solid performance from the American, as he made crucial challenges and won many aerial duels – keeping Havertz in check. 7.5.

Renato Steffen – He had a great game, as he was very lively up-front. He couldn’t convert the first few of chances, but got a deserved goal with a header. 7.

Xaver Schlager – He was absolutely everywhere in midfield, and ran the game for Wolfsburg. 8.25.

Maximilian Arnold – Great performance from him. He drove his side’s attacks, intercepted lots of passes and got two great assists from his deadly free-kicks. He went one better later as he scored from a massively deflected free-kick. 8.5.

Josip Brekalo – He had a couple of chances, but he couldn’t convert anything. 5.5.

João Victor – He was menacing up front, but initially his decision-making and end-product will surely have let him down. But he was great in the second half, and got a deserved assist. 7.25.

Wout Weghorst – Worked very hard up front, but couldn’t get too many chances for himself. Somehow didn’t score late-on. 6.25.

Team – Wolfsburg were very good throughout the game. Despite having only 35% the ball, they used it very well to score 4 goals, and perhaps could have had even more. They were strong at the back too, but the late goal they conceded will certainly frustrate them.But overall, it was a quality performance from them, and they will be very happy with it. 7.75.

Leverkusen drop out of the top 4 after this thrashing at the hands of Wolfsburg. They will need to get back to winning ways if they wish to keep the fight for the Champions league Spots alive.

Wolfsburg, on the other hand, cement their place in the Europa League spots with this great victory. Maybe just a little bit too late for a Champions League charge?