Premier League have announced the fixtures for the 2018/19 season and West Ham have been handed a tricky start.

Manuel Pellegrini’s side will face the likes of Liverpool, Arsenal, Chelsea, Manchester United, Tottenham and Everton in their first ten games.

The Chilean will need to ensure that the Hammers start the season with confidence and avoid heavy defeats against the top teams.

West Ham will be expecting a top half finish next season and Pellegrini would have been hoping for an easier start to life as the Hammers boss.

It will be interesting to see how the Chilean approaches these games at the start of the season. A series of defeats against the top teams could have a devastating effect on the players’ morale and therefore it will be important to sit back and grind out results in the beginning.

Furthermore, the Hammers will face Chelsea, Spurs and United away in April and therefore they cannot afford to be in a sticky situation towards the end of the season.

Pellegrini’s expansive style of football would be more useful as the season progresses. A cautious approach, in the beginning, could be the key to having a good season. 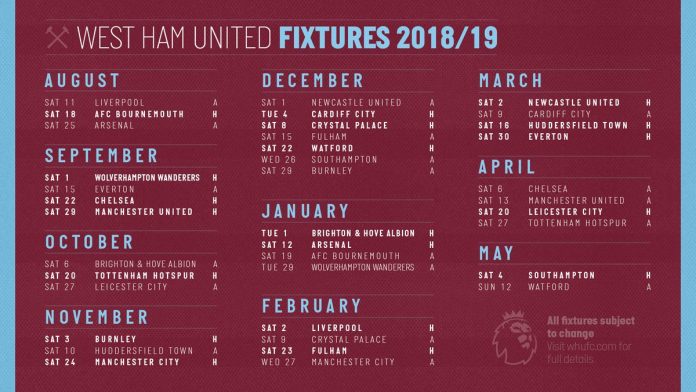 Here is how the West Ham fans reacted to their fixtures.

That December is quality!

surely i’m not the only one who plays an annual game of “find the 40 points”. ever the optimist, i know! #COYI

Let’s hope we are safe before April

Let’s hope we are safe by the time April comes..

What a shit storm this season is going to be