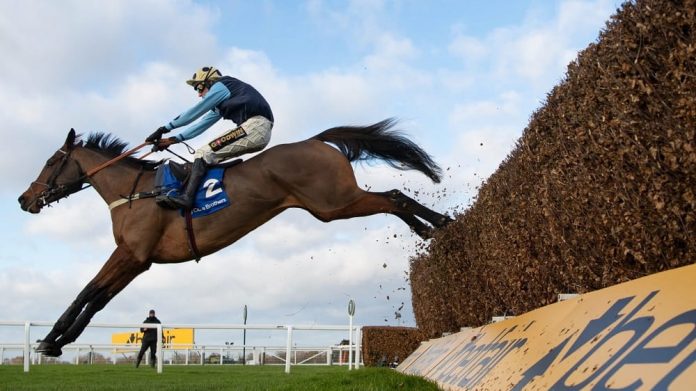 Our latest Warwick tips from a cracking card of jumps action on Saturday, 12 February. It’s Kingmaker day at this venue with that Grade 2 novice chase one of the last recognised Arkle trials before Cheltenham. Check out SportsLens experts’ Warwick tips with a NAP, NB and each way bets below.

We’re a month or so out from the Festival, so horse racing results here can make or break Cheltenham chances. Today is the last prep run for many hopefuls, and everyone wants to go to the major meeting with momentum. With that in mind, see which horses our tipsters fancy for victory en route. Supporting races on this card include the Listed 2m 5f Warwick Mares’ Hurdle and 2m 4f Warwick Castle Handicap Chase.

In the feature contest, the Kingmaker over an extended 2m, Edwardstone is the NAP of the meeting. Trained by Alan King, who has won this race three times since 2005, this eight-year-old Kayf Tara gelding has 6lb and upwards in hand on the opposition here. Belatedly progressive over fences, nobody in the horse racing world thought Edwardstone had really taken to this sphere 12 months ago.

Unlucky to be brought down on reappearance here, he came out and scored by seven lengths over course and distance next time up. King had no hesitation pitching Edwardstone right in at the deep end for the Henry VIII Novices Chase at Sandown in December. Backed into 3/1 on the best betting sites that day, he demolished the opposition bolting up by 16 lengths with re-opposing rival Third Time Lucki left trailing in his wake back in third.

There is no obvious reason why Dan Skelton’s runner should reverse form here. As Edwardstone has since followed-up under a penalty in the Grade 2 Wayward Lad at Kempton, he can give weight and a beating to his rivals again. According to the ante post Arkle betting, he’s joint-favourite, so should win this en route to Cheltenham. Edwardstone is 6/5 here and top pick among Warwick tips for this card.

Earlier on, only four have been declared for the 2m 5f event for mares. Marie’s Rock, still unexposed over this trip, looks the value bet on horse racing betting sites in this. Trained by Nicky Henderson for Middleham Park Racing, this seven-year-old daughter of Milan got no luck in-running whatsoever in the Lanzarote Hurdle at Kempton last time out.

Badly hampered by a faller at the second flight, Marie’s Rock had no chance. The return to a smaller field is a plus. Prior to that, she bolted up over this distance by seven lengths. The handicapper raised Marie’s Rock 9lb, but mark of 140 leaves her with little to find on main market rival Indefatigable off these terms. She also has 33/1 Cheltenham odds for the Festival Mares Hurdle.

Receiving weight all-round, and with Aidan Coleman in the saddle, Marie’s Rock is another of our Warwick tips here. Her stamina laden pedigree suggests there’s more to offer over this trip. Marie’s Rock is a lightly-raced mare open to further progress, so looks value at 3/1 with William Hill here.

Later on the card, Our Power is two from four over fences and could continue his progress in this sphere in the Warwick Castle Handicap Chase. Trained in Wales by Sam Thomas, this seven-year-old held re-opposing rival Jacamar by a head on his second start of the campaign at Wincanton. The runner-up went one better at Kempton over Christmas and the front two pulled 13 lengths clear, so the form looks good.

Although then falling at Doncaster next time out, any novice can be forgiven that. Our Power bounced straight back with victory at Huntingdon when last in action. That proved his head success over Jacamar was no fluke. While he is a further 2lb higher in the handicap, Our Power has a nice racing weight of 10st 12lb here.

Plenty of others are in with chances here but few in the field remain open to as much progress as Our Power. He looks a solid each way bet and complete our Warwick tips at 6/1 with William Hill, who pay four places, for a third win in four.