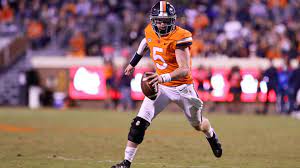 Last season, Brennan Armstrong was racking up yards for fun. The UVA Cavaliers quarterback threw for 4,449 yards and 31 touchdowns. Additionally, he rushed for nine more touchdowns. It has not been the same story for the Virginia QB this year. He has about half his yardage total of the previous year and he has thrown just 7 touchdowns, compared to 12 interceptions. Armstrong will enter the NCAA transfer portal and teams will be wondering which version of the quarterback they will get.

Brennan Armstrong is seeking a fresh start as his career at UVA appears to be at an end. Armstrong will enter the transfer portal as he seeks a new school as a graduate transfer. This will give him one year of eligibility with his new school.

Armstrong possesses true dual-threat ability and his experience should make him a hot commodity in the portal for next season. Over the last three seasons, he has rushed for around 1,100 yards and has a massive 20 touchdowns on the ground.

Questions will likely be asked about Armstrong’s drop-off from last season to this year. This year’s touchdown to interception ratio was a horrific 7:12. His yardage total also dropped by almost 50 percent.

If teams were guaranteed last season’s version of Armstrong, he could have his pick of schools. However, with the struggles of last season, it remains to be seen if his experience is enough for schools to risk a scholarship on.

Armstrong has spent his whole career at Virginia and holds the record for most passing yards at the school. It is also possible that Armstrong could explore options with other schools, but decide to remain at UVA and see his career out with the Cavaliers. Wherever he ends up, a school somewhere is going to end up with a high ceiling, low floor option under center.