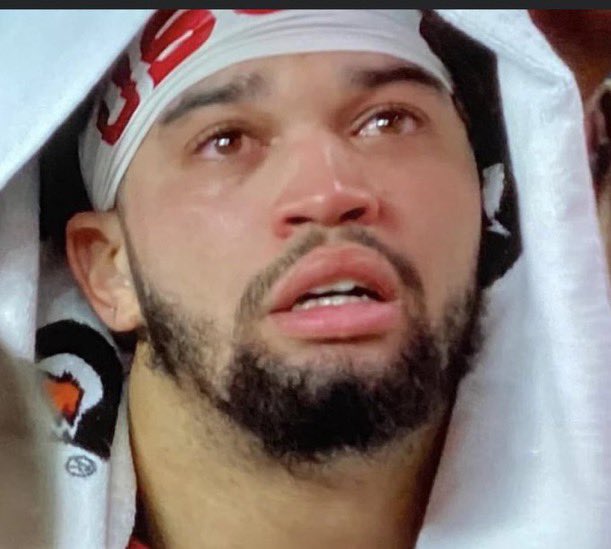 USC quarterback Caleb Williams sat with a towel over his head, sobbing as his team lost the Pac-12 Championship Game to Utah. Painted on his nails was the message, ‘F*** Utah.’ It held a different meaning post-game than it did pregame. Utah had just ruined the Trojans’ College Football Playoff hopes thumping them by a scoreline of 47-24. In his post-game press conference, Utah QB Cameron Rising was asked about the message. He said it was ‘cute’ and followed it up by saying ‘he couldn’t give a sh**.’

Caleb cries as Lincoln Riley forgets what his job is

It has been quite the season for Caleb Williams. The USC signal-caller is still favorite with sportsbooks for the Heisman Trophy and has been playing at high level all year.

He injured his leg in the second quarter on Friday evening, and Lincoln Riley apparently forgot he was the coach. With Caleb Williams limping badly, he stayed in the game.

“He was not even close to 50 percent,” Riley said. “I definitely thought about taking him out. He wouldn’t have let me, and he didn’t let me. He wouldn’t even let me take him out at the end.”

In case you forgot while reading that, Lincoln Riley is the head coach. Caleb Williams plays for him. Being brave is great, but watching your QB limp around, throwing like Conor McGregor does a ceremonial first pitch is probably where you step in, pal.

Lincoln Riley said Caleb Williams refused to come out of the PAC-12 Championship game despite his injuries ✍️ pic.twitter.com/slseM5XRbM

Before the game, Williams had painted his fingernails as he generally does. This time the message read, “F*** Utah.” While it might have been a message of defiance pregame, it certainly seemed more bitter as he sat there in floods of tears.

Utah had spoiled the USC party and they were not going to the College Football Playoff.

Cameron Rising was feeling nice in the post-game, at least for a second. He quickly went from 0-100 when asked about Williams’ “F**k Utah” paint.

Caleb Williams is at it again with the nail art 👀 pic.twitter.com/Z94GJga5aI

On Sunday, the selection committee released their final CFP rankings and USC were confirmed out of the playoff spots. Ranked at number 10, the Trojans will face number 16 Tulane in the Cotton Bowl on January 2nd at 1 PM EST. The game will be shown on ESPN.

Williams popped his hamstring in the Utah game and is questionable for the game.