According to Italian newspaper Corriere dello Sport, Tottenham are set to appoint former AC Milan boss Massimiliano Allegri  as their manager in the summer. 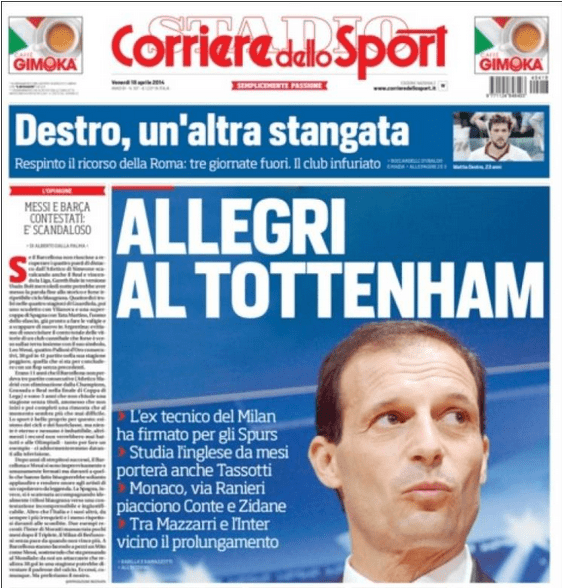 The report goes on claim that the 46-year-old has already agreed terms with terms with the North London club, and is due to take charge in July. Allegri has a great relationship with Tottenham’s technical director Franco Baldini, who is said to have been a key player in appointing the former Milan manager.

TuttoSport also claims that the deal was ‘done and dusted’ last week, but has come out in the open only recently.

Allegri has reportedly been learning English over the last few months in London and the Italian is believed to be bringing his own backroom staff to the Spurs. ‘BEIN Sports’ correspondent, CNN and Gazzetta dello Sport contributor Tancredi Palermi also confirmed that Allegri had been taking English lessons.

Dunno honestly on Allegri-Tottenham,it’s CorSport news.I only know that he spent last 2 months in London+has great relationship with Baldini

Alegri was sacked by Milan in January after a four year tenure at the club. Under him Milan won the domestic double in the 2010-11 season winning the Serie A and Coppa Italia, but he left the club 30 points behind leaders Juventus at the beginning of the year, not something that will fill Spurs fans with confidence if he is to take the helm at White Hart Lane.

@tc917 not appropriate for me to confirm or deny what other sources are reporting amico, I can say he has been in UK to learn English

What do you think? Could Allegri be a success in England? Get involved in the comments below…