So, the transfer deadline (August 31) has passed and the football market is now closed. Closed? Not quite. Indeed, while transfers from one club to another will have to wait until January to resume, teams may still sign players as free agents (and that until March 31, 2009).

So, inspired from this Top 11 Serie A Rejects article on mCalcio.com, here is a list of all the “European Football rejects” – in other words, all those players whose contracts were not renewed. Let’s see what kind of a team one could come up with (answer: a very *decent* team).

Ladies & gentlemen, I give you the “Unemployed FC” team: 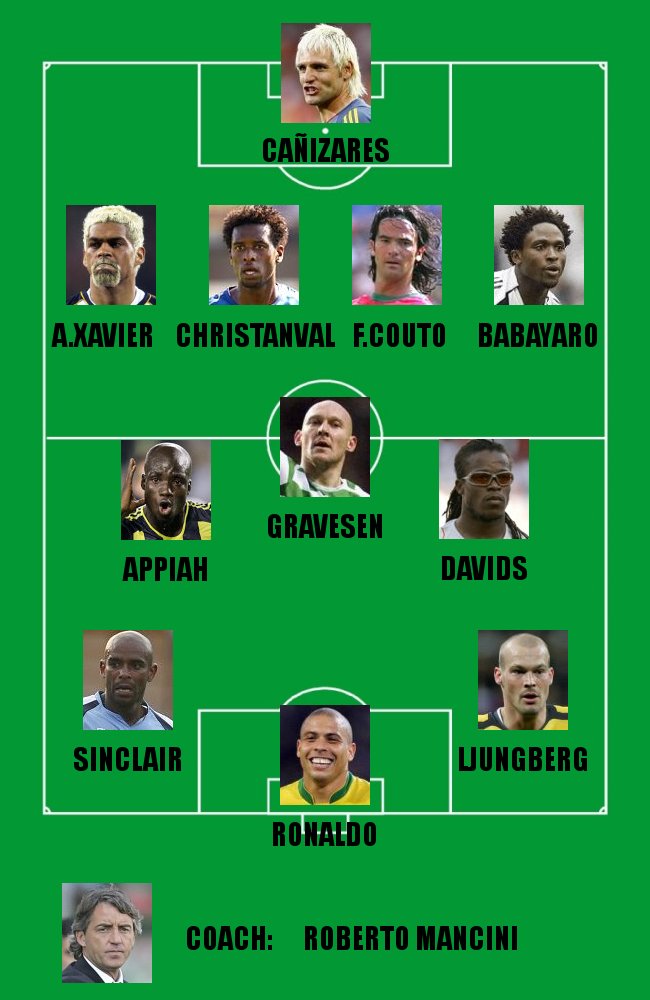 In goal, what better choice than ex-Real Madrid and Spanish International Santiago Cañizares: the 38-year old keeper was just released by Valencia after a rocky (to say the least) 2007-08 season (kept on the sidelines due to a fight with then-manager Ronald Koeman).

For the backline, we have elected to choose some Premier League “undesirables,” namely Celestine Babayaro (once a hot Chelsea prospect and just recently released by LA Galaxy), Philippe Christanval (ex-Barcelona and Fulham center-back, often thought to be the next Thuram… hah!), and last but not least, Abel Xavier (who has played for more clubs than I care to list, but among others Liverpool, Boro, and LA Galaxy). Xavier gets a spot in this team based exclusively on his hairstyle (let’s face it, skills weren’t going to cut it…). Completing the defensive quartet, how about ex-Portuguese international Fernando Couto (or, “Mr. Red Card” as I like to call him), once a glorious Lazio center-back but now out of a club following Parma’s relegation to Serie B.

Further up, there should be no shortage of midfield muscle with Stephen Appiah (ex-Juve, just released by Fenerbahce), Thomas Gravesen (ex-Everton and Celtic… oh and he also played at Real Madrid, we all know how that ended…), and Edgar Davids (ex-Milan/Inter/Juve, Barcelona, and Tottenham, once upon a time the best defensive midfielder in the world… but now on the fringe of retirement after a one-year season with Ajax).

In attack, we are looking at a three-man line-up. Style aplenty here with the likes of Trevor Sinclair (whom I like to call Mr. Bicyle Kick, just offloaded by Cardiff), Freddie Ljungberg (Arsenal legend deemed to be West Ham surplus), and… yes, you’ve guessed it, Ronaldo (just released by AC Milan due to continuous injury problems).

No team would be complete with a bench. So here are the “elected ones”: Luca Bucci (Parma) in goal, Daniele Adani (Empoli) and Cesar Aparecido (Inter) at the back, Stelios Giannakopoulos (Bolton) and Stefano Fiore (Mantova) in midfield, Alvaro Recoba (Torino) and Jimmy Floyd Hasselbaink (Cardiff) up top.

Finally, who better to pick as manager than this year’s Serie A reject par excellence: one mister Roberto Mancini (fired despite winning three consecutive Scudettos with Inter).

So there you have it: eleven starters, seven substitutes, one manager.

Did we forget anyone? Do YOU have another name to propose? Fire away in the comments!