If you can’t remember the last time you watched thousands of mature adults, on a day of deep blue skies and  blindingly bright high altitude winter sunshine, all weeping and singing at the same time, then you’re like me.  And while you like me have probably read in the news lately that happiness has been discovered to be contagious, but only when shared in person,  a case might be made for the belief that every now and then you can pick up a bit of contact emotion–including sheer joy–over distances of thousands of miles.

That’s what happened to this grateful scribe, observing from afar Sunday’s return leg of the championship final of the Mexican fall torneo.

The match was played in Toluca’s Estadio Nemesio Diez (nicknamed La Caldera, and for visiting clubs traditionally about as comfortable as the crater of an erupting volcano), and won by Toluca over Cruz Azul by a final global or aggregate count of 2(7)–2(6).  But mere numbers do not do justice to such a day.    This was an intense, exhausting affair full of wonderfully competitive football–much of it beautiful, passionate, skillful, and some of it brutal; there were thirteen yellow cards, a red card, and more hard knocks than could be counted, yet without a single C-Ron-esque display of wounded theatrics.

This was real war, not the opera:  one player, the defender Jose Manuel Cruz Alta of Toluca,  ended up staying on the pitch all the way to the end with one side of his face blue and swollen twice the size of the other–and he’d been the one who’d got the better of things in a violent clash with the excellent young Cruz Azul midfielder Cesar Villaluz; Villaluz  went into convulsions, apparently stopped breathing and when last seen was on oxygen being stretchered off to the hospital (as his side had run out of substitutions, they had to fare the rest of the way–and coming from behind at that– with ten men). 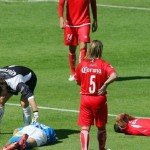 This was an unrelenting affair which took nearly three hours.   Ninety minutes of furious action followed by two periods of leg-heavy extra time followed by an energy-draining round of thirteen penalties, the first twelve all made. When the unlucky-for-the-visitors thirteenth was saved by Toluca’s 39-year-old Argentine keeper Hernan Cristante, an infernal ocean of dammed-up feeling broke loose and turned to pure heavenly joy among the red-clad sections of the crowd.

Andres Cantor, the great Argentine announcer, made the contest a stage upon which to build with his astonishing voice the roller coasters of emotion that always make these finals so thrilling–none more so than this one.   This was a match that finally wrung every last drop of emotion out of everyone: not only the sincerely committed, enormously valiant players and coaches, but the masses of absolutely involved spectators. There was not a quiet moment all day,  the small lagoon of  Cruz Azul blue-shirts standing up continuously to sing bravely in the face of the far louder, brighter sea of Toluca red shirts and pennants and banners that surrounded and finally overwhelmed them.

Coming in to this return leg, or vuelta, down 2-0 after a flat and dispirited performance before their disappointed home fans on a bone-chillingly cold night back in the capital, Cruz Azul appeared to have little chance to dig themselves out of the hole they were in.  They faced not only perhaps the most difficult of all Mexican away venues, but also the most difficult of defenses; Cristante, indeed, was coming off a recent stretch of nine consecutive games without surrendering so much as a single goal.  He’d already won four championships in goal for Toluca, and it appeared now as though a fifth was inevitable.

And indeed, as the gran final now began to unfold, it looked very much like a repeat performance.  Once again Toluca was orderly, precise, serene, dominant; as they had in Mexico City three nights earlier, they were playing with energy, discipline, confidence and flair.   But then something mysterious occurred.  After half-time Cruz Azul coach Benjamin Galindo tossed caution to the winds, made three substitutions, opted to attack at any cost and sent his players out chasing for all they were worth a forlorn hope–what now appeared to be a mission-impossible fightback.

It was as if Galindo had instilled in his team the understanding that to lose by six was no worse than to lose by one or two.  And then suddenly, back they came.  There was a Cruz Azul score: a lovely centering pass from the gifted joven Villaluz, flicked by the heel of Paraguayan forward Pablo Zeballos (a classic taquito) into the path of Alejandro Vela to turn home.  Tienen la esperanza! exclaimed Andres Cantor.  They’ve got a look-in!  And then, with twelve minutes left, blue-shirted defender Julio Caesar “Cata” Domingues headed in a corner from Jaime Lozano, and Cantor’s famous Gooooooooaaallll! echoed all across the intently listening Republic.

The aggregate stood now at 2-2: and the real drama was at that point only beginning.

The Mexican final–since 1997 three have been two every year, the Apertura in the Fall and the Clausura in the Spring–is a sort of national fiesta, and as such a pretty tough ticket at the best of times. But when, as has happened quite often in recent years (the past two winners before Toluca, Atlante and Santos, were also smaller clubs), the final migrates away from the big stadiums of Mexico City and Guadalajara, it  can be all but impossible to buy your way in through honest means.This aspect of things always adds a little extra publicity spice to the run-up, and this year, interviews with ticket-hungry Toluca followers dominated the sports news in advance of the deciding leg.

And so that much anticipated match finally took place on Sunday: in the thin air of this small-to-mid-size  provincial market and industrial city–the city located at the highest altitude of any in the Republic, at 2680 metres, high enough indeed to land itself and its earnest, proud little club within fallout range of the Brazilian clubs’ longstanding efforts to restrict high-altitude competition in Copa Libertadores competition (a campaign frustrated at one point  by the brilliant p.r. ploy of  Bolivian president Evo Morales, who invited reporters to come watch him have a kickabout in the snows of the high reaches of his Andean nation, to suggest that even if pacy Brazilian fullbacks might get winded trying to bomb forward at such altitudes, he himself was hardly daunted by the task.)

Toluca, a small club in a bright red kit–they’re sometimes called the Diablos Rojos, Red Devils, and sometimes los choriceros, hot red peppers–has for some time sported a refreshing, intelligent, engaging, highly entertaining style of play, with amazing success considering their low-echelon status in a league perennially dominated by a few big clubs.  In overcoming the giant club Cruz Azul–Cruz Azul’s shirts bear the blue cross emblem of a huge cement company, and they are accordingly called La Maquina Cementera, and are historically the club of the employed industrial working classes; that is, those with actual jobs, not including peasants–this overachieving minnow Toluca has now won its ninth championship, thus surpassing Cruz Azul’s total of eight. (Though always a power, the maquina have been underachieving and won nothing for the past decade.)

The only clubs to have won more titles are Chivas of Guadalajara with eleven and America of Mexico City with ten; but neither Chivas, the unofficial national club (they employ only Mexican players, and thus in effect represent everybody, that is, Mexicans of all classes and political persuasions), nor America, owned by the national television-monopoly conglomerate known as Televisa (Americanistas tend to represent the middle class and the political center), have been doing very well of late, and indeed neither of them even managed to quality for the eight-team liguilla from which Toluca now  justifiably emerges as campeon. 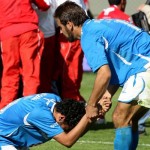 And so how did that intense long day in the bright high sun finally close?   Two relatively slow-motion extra-time periods.  Then a period of lie-down in  dappled sun-and-shade, and a regathering finally around the managers, Cruz Azul’s Galindo and Toluca’s Jose Manuel “Chepo” De la Torre (a decade before, the two had been teammates on a championship Chivas team); De la Torre could be seen absent-mindedly stroking the wounded head of his battered defender Cruz Alta, much as a mother strokes the head of a child, as he explained the strategy for kicks to be taken. And then those excruciating penalties, with not a miss through the first dozen, the whole building sequence narrated so wonderfully by Andres Cantor that if you don’t enjoy this two-part set of clips of that full narration, you probably don’t like football–or high drama:

That second clip also provides, at the end, just a taste of the emotion I mentioned coming in–the heady elixir in the air of an unforgettable day of football, celebration, excitement, pain, and tears of sorrow and joy. You’ll see Hernan Cristante, in tears, saluting the home fans, and the wonderfully skilled Brazilian-born midfielder Sinha, holding his child, in quiet tears as he’s interviewed; these are battle-hardened international veterans mind you, for the moment totally and quite movingly at one under the bright sun with the equally overjoyed, weeping supporters in their adopted footballing homeland. And then there’s an interview with Toluca coach Jose Manuel  “Chepo” de la Torre, also in tears.  Two years before to the day, De la Torre was celebrating another championship won by a team under his direction.  That day it was Chivas.   But as you will see, for De la Torre as for almost everybody fortunate enough to have been there (as well as for many of us who weren’t), this day it was totally Toluca.

(For the curious, here are two additional highlights clips, one for the first leg and one for the second leg of the final, up to ninety minutes; alas, on these two the announcer is perfectly fine, but is not  the great  Andres Cantor):