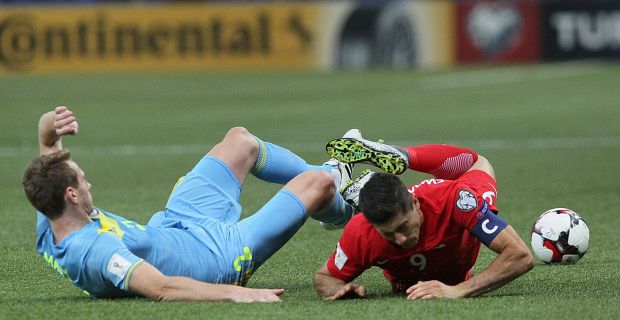 Usually, a calm and collected presence on the field, Robert Lewandowski’s swinging elbow caught the Kazakhstan defender Yeldos Ahmetov and left him with a bloody nose.

The player went down immediately after contact. Although it could be said that the elbow was unintentional from the Polish striker, his decision to trap the Kazakhstan captain Baurzhan Islamhan in a headlock later in the game was certainly intentional.

It was a feisty affair as both sides showed tremendous aggression towards each other. Lewandowski’s reaction was probably provoked as the Polish striker clashed with the Kazakhstan players multiple times during the course of the match.

Poland were leading 2-0 at half time with Lewandowski already on the score-sheet. However, Kazakhstan managed to take advantage of their complacency in the second half and fought back (metaphorically speaking) to earn a draw. The Polish side will not be happy with the way they lost a comfortable lead against weaker opposition.

As for Kazakhstan, they won’t be too bothered with the level of aggression shown in the game. It was an excellent point and result for the home side after all.