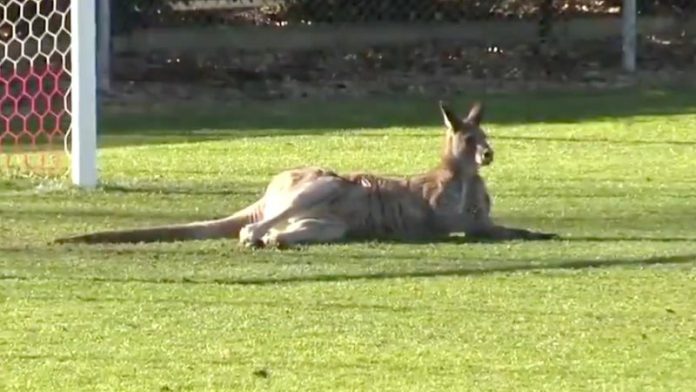 Australia’s football team is called the ‘Socceroos’ but a different kind of ‘Roo’ made its mark during a women’s match in Canberra over the weekend.

An errant kangaroo interrupted the Women’s Premier League fixture between Belconnen United and Canberra FC, causing a delay of over 30 minutes.

Video footage showed the misguided marsupial making its first appearance on the pitch during the half-time break on Sunday afternoon.

The kangaroo bounded around the field, brazenly ignoring efforts to drive him away.

Players and officials tried to force the unexpected pitch invader away by kicking balls at him, but he used his hind legs and tail to deflect them out of the goal area.

The kangaroo was eventually chased from the stadium through a break in the fence by a driver in a pick-up truck.

Kangaroos can be found almost anywhere in Canberra, although they usually doze among the trees by day and wander the streets at night to graze on watered lawns.