Xherdan Shaqiri’s time at Bayern Munich has been nothing short of a struggle. The Swiss star who moved to the Bavarian giants in 2012 from FC Basel has hardly got the game time he expected at the Allianz Arena. Shaqiri however dazzled at the World Cup in Brazil but in reality, he was always going to have a bit part role at Bayern.

The dazzling 23 year old was linked with a move away from his present club in the summer with Liverpool as well as Italian side Roma interested in acquiring his services. However, none of the deals failed to materialize and the player stayed put at the Munich based side.

However, Italian Media outlet Tuttosport have been reporting over the past few days that reigning Serie A Champions Juventus are keen on signing the winger in the upcoming January transfer window. They have also dedicated a full front page report this morning that the Bianconeri are just a step away from signing the player in the winter. 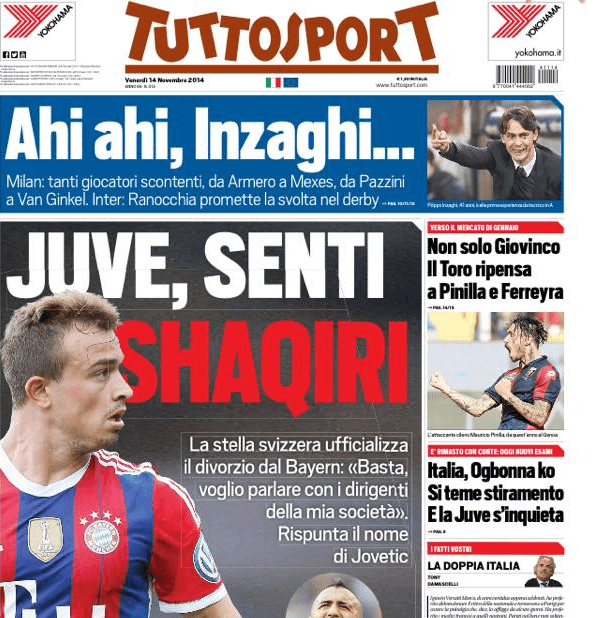 Shaqiri has just featured in 13 appearances for Bayern this season and has scored a couple of goals. We had earlier reported that Juventus were interested in the Swiss star while there were claims that Russian side Spartak Moscow had made an offer close to €20m for the player.

Liverpool though would be disappointed to miss out on Shaqrir as it now appears that he will move to Turin in January. The left footed winger would have seamlessly fitted in Brendan Rodgers’ starting eleven thanks to his immense versatility. Moreover Shaqiri is tactically very flexible and would have suited the Reds’ style of play. Liverpool had also made also made contacts with Shaqiri’s brother who is also his agent in the summer but the deal somehow fell through.