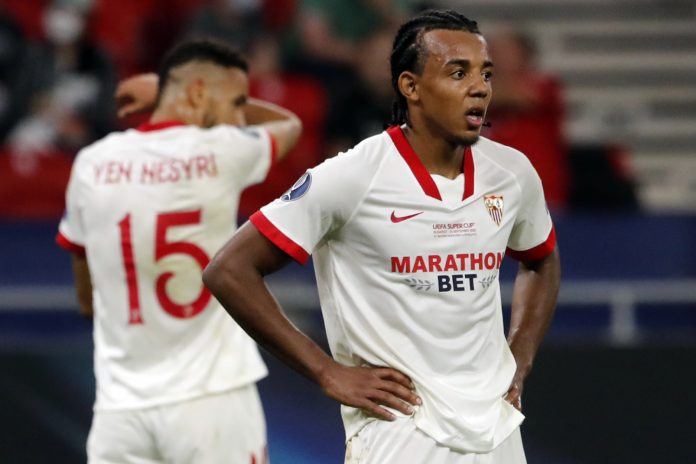 French defender Jules Kounde is one of five centre-backs being tracked by Manchester United, according to a report by Spanish publication Mundo Deportivo.

Kounde has just begun his second season at Sevilla, having signed from Bordeaux in the summer transfer window of 2019. He has impressed massively at Los Nervionenses, making it into the 2019/20 Europa League squad of the season as he helped his side to the trophy.

The 22-year-old put out several impressive displays last term, most notably in the Europa League semi-final against Manchester United, as Sevilla won 2-1.

And now it seems like Man Utd are ready to make a move for the Frenchman, with Mundo Deportivo claiming he is part of a five-man shortlist of cente-backs being targeted by the Red Devils.

Kounde was a target for Manchester City last summer, with Pep Guardiola’s men reportedly having a €55m bid turned down. Liverpool were also named as possible suitors for the youngster, with injuries to Virgil van Dijk, Joe Gomez, and Joel Matip leaving Jurgen Klopp short of options at the back.

The former Bordeaux man apparently has an €80m release clause, so any potential takers will have to stump up a huge fee for his services.

It is no surprise that Man Utd are in the hunt for a new central defender. While their midfield and frontline are looking fearsome, there is a lot left to be desired at the back.

Phil Jones and Marcos Rojo are both expected to be leaving Old Trafford in the coming months, leaving manager Ole Gunnar Solskjaer with just four natural centre-backs to choose from. Eric Bailly’s fitness is a constant worry, while Axel Tuanzebe is still relatively unproven. Harry Maguire and Victor Lindelof are Solskjaer’s favoured pairing, but there are question marks over both of them.