After Chelsea’s success in Spain the previous night, Real Madrid would have been looking to add further insult to rivals Barcelona following their win over them at the weekend, by doing what Barcelona could not do and reach the Champions League Final.

Cristiano Ronaldo was wearing a pair of sail/red Mercurial Vapor 8 football boots, changing things up for the first time since the Vapor VIII were launched by not wearing the Bright Mango pair. After just fifteen minutes Ronaldo and his new boots looked to be cruising their way to the final, two quick Ronaldo goals, saw Real move into an early lead over Bayern Munich.

The first, a lesson to his La Liga counterpart Messi, was a sweetly struck penalty, awarded, after Alaba was judged, perhaps harshly, to have handled the ball. The second saw Ronaldo this time coolly finish off a pass by Ozil with an immaculate shot into the bottom left hand corner of the goal.

After that the game did not go the way the Real Madrid fans and team would have wanted. Bayern Munich slowly forced there way back into the game and drew level in the 27th minute when Robben made amends for an earlier miss with a penalty that crept into the corner of the goal despite Madrid keeper Casillas getting a hand to it. From then on the game ebbed and flowed with Bayern Munich possibly having the best of it. Real Madrid kept up the pressure though with a number of free kicks by Ronaldo. 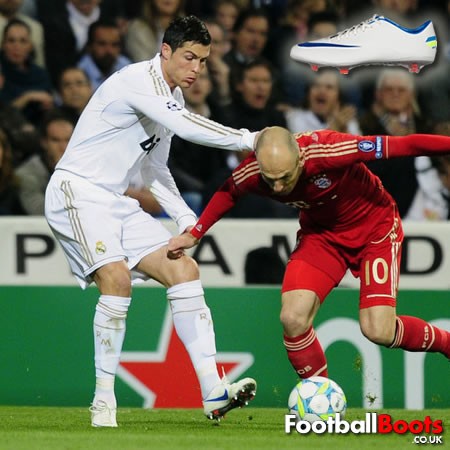 With ninety minutes completed, and the result being the only one that could see the tie ending in a draw, the match went into extra time. After a frantic two halves the football slowed up perhaps understandably as nervousness and tiredness set in. The best attacking play came in the 27th minute of extra time when Marcelo dribbled the ball from his out of his own box before releasing a pass that found Higuain who though had run into an offside position. Unfortunately for Madrid, Ronaldo had been coming up behind Higuain in an on side position, and would have been clean through on goal if the pass had reached him instead.

That was the closest either side came, and the game drifted to a penalty shoot-out, the first in a Champion leagues semi-final since 2007 when eventual winners Liverpool beat Chelsea. Germans sides have an enviable reputation for being successful in penalty shoot outs, but neither side had ever been eliminated from Europe’s premier club competition before in this way, so something had to give.

The Germans got off to the best possible starts in the shoot-out when Ronaldo looking to hit the back of the net for the third time of the night with his new football boots, saw Neuer save his and then Kaka’s penalties. It was only the second time in twenty-four penalties for Real that Ronaldo has missed.

The Spaniards got themselves back in it after Bayern saw their next two penalties saved and Real Madrid’s Alonso scored. Sergio Ramos however blasted his penalty not just over the bar, but nearly out the stadium, leaving it to Schweinsteiger to slot home his penalty and send Bayern Munich to meet Chelsea in the final on 19 May at their own stadium – a final no one really expected a couple weeks ago.