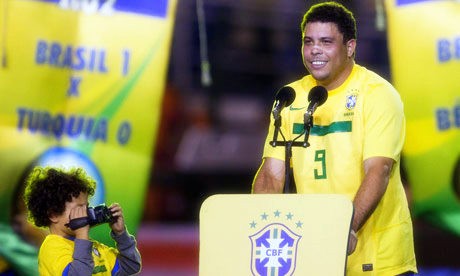 In the mid-90s a striker from Brazil was making tremors throughout the world football as he scored 42 goals in 46 appearances with PSV Eindhoven.

His journey continued from there to Barcelona to Inter Milan to Real Madrid and greatness pursued in all the four leagues he played in.

On the international level, he served the national Brazilian team for 18 years. Appearing in four World Cup and winning two and remaining the top overall scorer in World Cup with 15 goals.

Ronaldo has just made his last appearance in a yellow shirt in a friendly against Romania. He came on in the 30th minute and played until half-time.

Ronaldo had a couple of opportunities but could not score. He told the crowd:

“I had chances to score. Sorry for not finishing them correctly. Thanks to all of you for what you did in my career. When I cried, you cried with me. When I smiled, you smiled with me. See you soon, but on the sidelines this time. I’m very proud of being Brazilian.”

He is the man who changed world football forever by showing what pace, flair and exuberance can deliver. To commemorate all he has achieved, here’s a video comparing two eras – B.R. (Before Ronaldo) and A.R. (After Ronaldo).

He has sustained the game’s prominence not only in Brazil but in the rest of the world as well. He redefined what a center forward can be expected to do and brought Brazilian football firmly into the 21st century. This video is a tribute to his legacy: