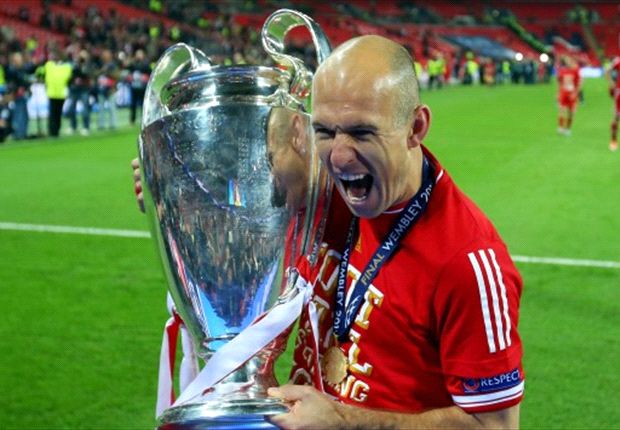 Saturday night saw Bayern Munich deservedly crowned champions of Europe, after beating Dortmund in an entertaining Champions League final at Wembley. The victory not only saw Bayern dismiss their tag as ‘chokers’, it also did the same for the Man of the Match on the night, Arjen Robben.

The 29-year-old has been widely regarded as one of the most talented, dangerous players of his generation, but he has also had the reputation of something of an enigma.

His work-rate for the team has often been questioned, while he has ‘bottled it’ in a number of huge games throughout his career; from the one-on-one with Iker Casillas in the 2010 World Cup final to the penalty miss in last year’s Champions League Final defeat to Chelsea.

Many thought he didn’t have the mental toughness and ability to perform in the biggest games like a Lionel Messi, Cristiano Ronaldo or Andres Iniesta, but on Saturday that all changed in the space of a couple of hours.

The Dutchman was terrific from start to finish, proving to be a constant threat down Bayern’s right wing and also venturing into central areas more than normal. It resulted in Robben creating the opener for Mario Mandzukic in the second half, before scoring a dramatic late winner in the 89th minute, after Ilkay Gundogan had earlier equalised for Dortmund with a penalty.

It was the defining moment of Robben’s career to date, and when he hangs up his boots that will likely still be the case.

The sudden increased work-rate from Robben seems to have made a huge difference to his game, and maybe the injury to Tony Kroos – which allowed him to get back into the first-team – and imminent arrival of Pep Guardiola made him sit up and realise that now was the time to seize the moment and make the most the of the brilliant talent he possesses.

With his 30th birthday looming, he suddenly seemed to realise that time was running out to fulfil his potential.

Until Saturday’s game Robben’s career had promised much and delivered a fair amount, but not quite as much as everyone expected when he was an upcoming star.

After enjoying hugely impressive spells with Groningen and PSV Eindhoven, when he was just in his teens, Robben was pencilled in as the star in an exciting generation of young Dutch stars including Robin van Persie, Wesley Sneijder and Rafael van der Vaart.

He won the Netherlands Young Player of the Year award, before Chelsea snapped him up in the summer of 2004, under the new management of Jose Mourinho.

Despite enjoying three very good years at Stamford Bridge, including winning two Premier League titles, injuries plagued his time at the club. When he was fit and firing he was one of the best players in the league, but too often he struggled for form and fitness. A move to Real Madrid beckoned.

Robben arrived at the Bernabeu in the summer of 2007 for a fee in the region of £24 million. In his two years at the club he was again a regular, but the Madrid fans never totally warmed to him, despite helping win the La Liga title in the 2007/08 campaign.

With the mega-money signings of Cristiano Ronaldo and Kaka confirmed in the summer of 2009, Robben was deemed surplus to requirements by new president Florentino Perez, and the Dutchman had to move on to pastures new.

Bayern Munich came calling ahead of the 2009/10 campaign, and Robben was given the number 10 shirt at Allianz Arena. In his debut season with the club he was a key reason in them reaching the 2010 Champions League final.

Firstly, his crucial goal sent them through to the quarterfinals, before his stunning volley against Manchester United at Old Trafford helped Bayern progress to the semis. It was to end in heartbreak, however, as Bayern succumbed to Mourinho’s Inter Milan side in the main event. The season ended on a good personal note for Robben, however, as he was named Footballer of the Year in Germany.

The last three seasons have been typical Robben: injury-plagued but also containing moments of brilliance. Having lost his regular place in the starting line up, many thought his time at Bayern was at an end, but he has responded superbly.

The funny thing is that the crowning moment of his career has actually come at a time when he wouldn’t have even been playing had Kroos been fit.

At international level, Robben has won 63 caps, scoring 17 goals in the process. He has appeared in the last five major tournaments, with his best chance of winning silverware came in 2010, at the World Cup in South Africa.

The aforementioned one-on-one was a huge moment in the game, and eventually Iniesta’s extra-time winner broke Dutch hearts, and Robben felt the guilt more than most. For such a talented generation of attacking stars, Netherlands have under-achieved without question, and Robben has never quite produced top form for his country.

When Arjen Robben does call it a day on his career – perhaps in four or five years from now – he will be deservedly thought of as one of the best attacking players of his generation. Until Saturday night he was in danger of being remembered as someone whose greatness couldn’t be confirmed because of a consistent failure to produce his best football when it really mattered.