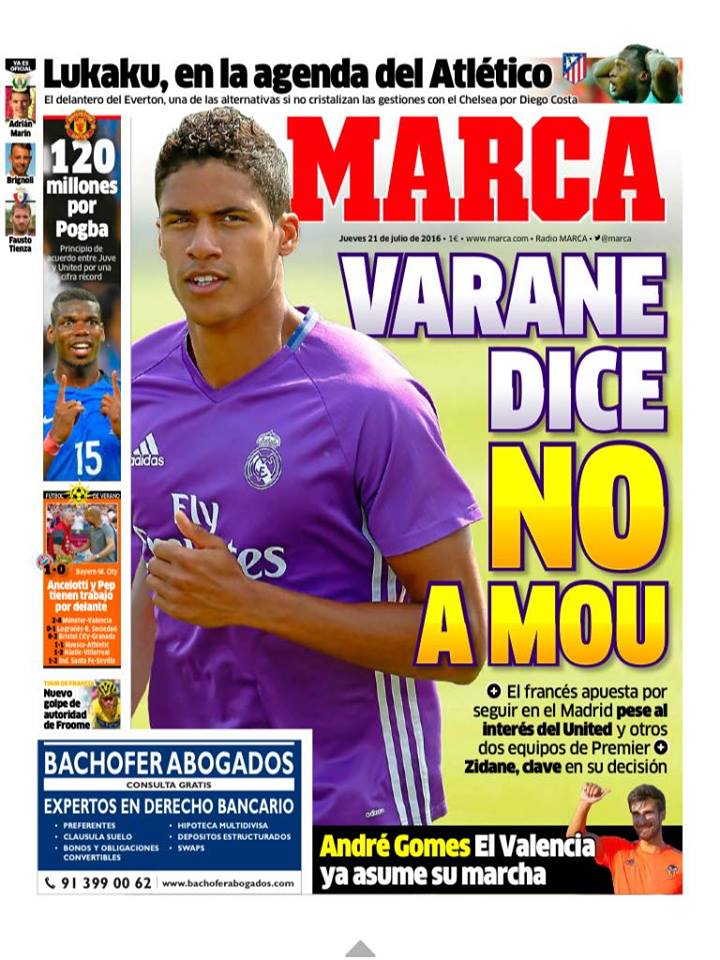 Check the front page of Spanish newspaper Marca today. It reads: “Varane Dice No A Mou”. It means “Varane says NO to Mou”.

I don’t speak Spanish. So I let our in-house Spanish translator Manuel Traquete to translate the story for me. Based on his translation, here’s the gist I get:

Jose Mourinho signed Varane in 2011 from French club Lens during his time at Real Madrid. He gave him a platform to shine and the player didn’t disappoint. Varane went on to become not only a key player for Real Madrid but he has established himself as one of the regular starters for the France national team at the same time.

Varane, 23, made 23 starts in the Spanish League last season but he is generally seen as the club’s third choice centre-back behind Pepe and Sergio Ramos.

Mourinho tried to lure the Frenchman with the offer of a regular first team football to join him at Manchester United. He directly got in touch with Varane and let the player know of his interest in him. United were even ready to launch a €40m bid for the Frenchman; only the green signal from Varane was missing.

Marca claim that Varane seriously considered Mourinho’s offer but Real Madrid never intended to sell him. Madrid have high hopes on him and feel that at his age he still has a lot of time to impose himself at the club.

Zinedine Zidane, the Madrid boss, had a personal conversation with Varane and told him that he will be given more opportunity to make his mark next season. Madrid convinced him that the time is not right for him to leave, rather he should not consider that option, as yet.

Manchester United have already signed Eric Bailly this summer from Villarreal and Mourinho believes the Ivorian can emulate Madrid’s Varane under his stewardship at Manchester United.