Manchester United‘s unceremonious fall from grace has been without doubt the most talked about topic throughout the course of the current Premier League season. Liverpool’s rapid ascent to greatness, Manchester City retaining the Capital One Cup and Alan Pardew’s epic head-butt incident have all been up there as some of the most hotly debated, tweeted and talked about events. None more so, though, than David Moyes‘ calamitous first season in charge at Old Trafford and, frankly, it has gotten rather dull. 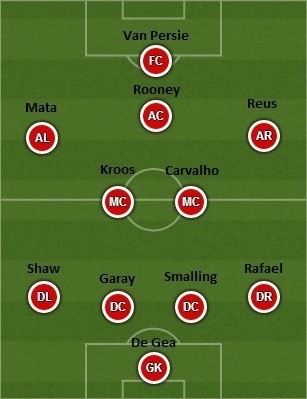 The red half of Manchester’s misfortunes domestically and in Europe have been laid out on the surgeons table and mercilessly picked apart time and time again, and it is now time to cast an optimistic eye towards next season and how United’s team might look after a rumoured £200m Summer revamp.

Luke Shaw is the hottest property in England right now and it isn’t hard to see why. The PFA Young Player of the Year Nominee has continuously impressed with his solid yet free flowing performances on the left-hand side of defence. United have made it no secret that they wish to acquire the services of the 18 year old in the Summer, and their constant efforts to unsettle Shaw seem to be paying off. The player recently ‘favourited’ a tweet linking him with a move to Old Trafford.

Although Southampton Coach Mauricio Pochettino has recently been quoted as saying, “…right now he’s a player at Southampton and it looks as though it will stay that way”, it would be hard for the Southampton board to turn down a bid of £30m if it was to be forthcoming.

Luke Shaw may have been linked with a move to United all season but Ezequiel Garay seems like he has been on a slow path to Old Trafford his entire career – and this Summer may finally be the transfer window that sees him make the move. The athletic Argentinian has wonderful vision and composure on the ball and aerial ability to match Nemanja Vidic – an attribute that Tottenham Hotspur can certainly testify to.

With Garay in the side Benfica have been airtight, conceding just 15 goals all season – a natural replacement for the soon to be departing Serbian, it would seem. What’s more, the former Galactico has a £17m release clause in his contract, although United will hope to secure his services for less as the player only has a year left on his contract.

David Moyes will look to finally solve their Midfield debacle this Summer, an issue that has existed long before the Scotsman’s arrival at the helm. The supposed want away midfield maestro Toni Kroos is top of Moyes’ wishlist, with a rumoured £260,000 a week salary being mentioned in an effort to lure the German away from Bayern Munich.

The Manchester target has been in superlative form this season for the Bundesliga champions with five goals, eight assists and an astonishing passing accuracy of 92% – the kind of figures that United fans would be licking their lips over. Although his agent has recently denied reports that he is leaving the Allianz Arena, Kroos’ is rumoured to be unhappy at playing second string to Bastian Schweinsteiger and therefore reluctant to put pen to paper on a new deal.

A new look United side could also see Sporting Lisbon leviathan William Carvalho line up alongside Toni Kroos in the centre of the park, as recent reports have emerged implying that a £35m deal is all but finalised. The 6’2″ midfield general is renowned in Portugal for his commanding presence in front of the back four and his Patrick Viera-esque ability feed a pass in to the more attacking midfielders.  With this in mind, Carvalho would surely act as the perfect foil for Kroos, as the Portuguese international’s ability to sure up things in the middle would ensure Kroos had license to push on further up the field. Nostalgic memories of Keane and Scholes aplenty.

After being thwarted in their attempts to pry long-term target Ilkay Gundogen away from Borussia Dortmund Moyes’ attention has now turned to his infinitely talented colleague Marco Reus. The speedy German embodies everything that United have been so dearly lacking from the wide areas this season. His lightning pace and innate ability to ghost inside and open fire on goal make him a tantalizing prospect for the Red Devils. Even more so when you consider that the 22 goals and 16 assists in all competitions that he has provided is more than Ashley Young, Antonio Valencia, Juan Mata and Adnan Januzaj have combined.

With rumours of unrest in the Dortmund camp after a very public disagreement between Reus and Goalkeeper Roman Weidenfeller, coupled with Former Dortmund playmaker Mario Gotze’s recent revelations, a bid of around £30m might just do the trick.

As Mata recently pointed out, Manchester United are undeniably a team in transition. If the big budget rumours are correct, though, it will surely be a short-lived juncture that will see a restoration of parity and United one again challenging for the title.