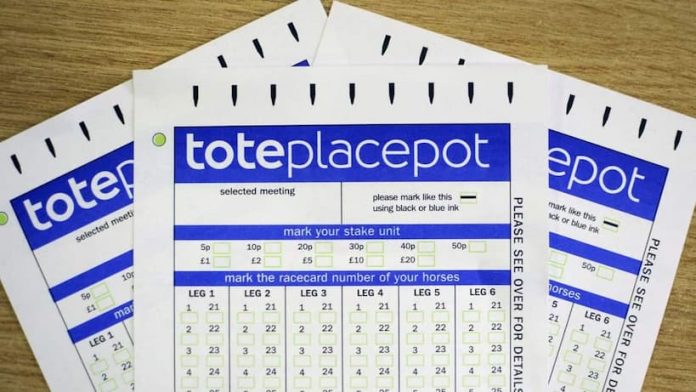 For many, having a bet on the horses is as simple as picking a fancy and then placing a bet on it to win!

However, the ‘good news’ for horse racing punters is there are many different types of bets that can increase your enjoyment of this sport and also potentially give you better returns from the bookmakers.

With that in mind, the Placepot is certainly a bet that’s worth getting to know a bit better.

Note: Even though the Tote run the daily Placepot, you can also enter the pool via some of the leading bookmakers like bet365.

Race ONE: Taunton 1:20 – Sawpit Sienna got a bit outpaced on quicker ground last time at Catterick but still did well to finsih fifth. Softer ground will help and the Sam Drinkwater yard have a fair 22% strike-rate with their hurdlers at the track.

Hot In The City gets in here with just 10st 7lbs and despite being well-beaten in recent races is into a handicap for the first time, which is significant. The Walford camp also boast a useful 24% record at the course with their runners over hurdles.
Selections: 11, Sawpit Sienna & 14, Hot In The City

Race TWO: Taunton 1:55 – In a race that lacks depth, this should be a straightforward task for the Harry Fry-trained Lady Adare, who heads here unbeaten from three races. She can fear most from Peerless Beauty.
Selection: 1, Lady Adare

Race THREE: Taunton 2:30 – With a 29% strike-rate with his hurdlers at Taunton it’s hard to ignore the Paul Nicholls yard – they run Inca Da Lafayette here. This French 4 year-old makes his debut in this country but heads here off the back of a win in a NH Flat race and gets in here with just 10st 8lbs to carry.

Aristocrate was a slightly disappointing fifth at Fontwell at the end of January. He was a beaten favourite that day and didn’t jump great, but with that run sure to bring him on and the blinkers on today a much better showing is on the cards.
Selections: 1, Aristocrate & 12, Inca De Lafayette

Race FOUR: Taunton 3:05 – Larkbarrow Lad has finished in the top five in his last eight races and despite not winning since 2019 is dropping down the handicap to an attractive mark.

The only course winner in the field is the Jane Williams entry – Esprit De Somoza. This 8 year-old stayed on well last time at Wincanton to suggest the step up in trip to 2m7f for the first time is worth a crack.
Selections: 6, Larkbarrow Lad & 5, Esprit De Somoza

Race FIVE: Taunton 3:40 – Trainer Paul Nicholls has won this race three times in the last four (including the last two), so despite having a bit to prove at the moment, his Birds Of Prey is worth chancing. A course winner that will enjoy the drop back in trip and with only 10st 5lbs has a featherweight to carry.

Race SIX: Taunton 4:15 – The Nigel Twiston-Davies yard are 2-from-8 with their chasers here so a chance is taken on their Fantomas. Fourth the last twice, including two runs back here at the track. The drop back to 2m5f looks a good move and stable conditional Eddie Edge takes off a handy 10lbs too.

In 2019, we saw the Colin Tizzard yard win this race and with their horses in fine form at the moment their Furkash is the final pick. He’s not fired in recent races but a combination of being dropped 5lbs, eased in grade and the better form of this yard make him much more interesting this time.
Selections: 1, Furkash & 2, Fantomas

Join bet365 today and play the daily PLACEPOT through their site

What Is A Placepot And How Does It Work?

The Placepot has become the most popular pool bet for UK and Irish horse racing punters as it means you’ve got a chance to have an interest in the first six races.

It’s appeal is that you don’t have to find the winner in each race, but just a horse that will be placed (depending on the number of runners) in each of the first six races of a particular meeting.

The Placepot is run by the Tote and through a pool betting style system, but several leading bookmakers – like bet365 – now also give the option bet on the Placepot on their site – these all still go into the same big universal pool for each separate horse racing meeting.

In short, the more people who have bet in the Placepot the bigger the pool will be.

Therefore, just like the lottery, the fewer people who have placed horses in the first six races at a given horse racing fixture, means the bigger the winning dividend return.

In contrast, should a lot of fancied horses win (or be placed) then there is a strong chance a lot of people would have picked these Placepot horses and the final dividend will be a lot small as it’s shared between more people.

How Does A Placepot Work?

The simple way to play the Placepot is to just pick one horse in each of the first six races – then if ALL of these horses are placed (this depends on the number of runners in the race and race type – more below) you will have a share of the final dividend.

However, once you get familiar with the Placepot, you can also decide to have more than one horse per race – this will increase your chances of winning, but also mean the stake of the bet will be higher.

These are often referred to as ‘Placepot Lines or Perms’

It’s a fairly straightforward calculation to work out how many lines a Placepot with more than one horse in each races will cost.

How Much Can A Placepot Cost?

The beauty here is that you can make it as cheap or as expensive as you want.

The minimum stake per line is 10p, although some operators may allow 5p lines so be sure to shop around, while the minimum total stake is £1.

How Are Placepot Places Determined?

This depends on the number or runners or race type.

How Do I Work Out My Placepot Winnings?

Tote Placepot winnings are universal with the final dividend normally given out around 30 mins after the sixth race has finished.

You can also now follow the progress of the pool at each meeting at the TotePoolLive.com site – this will display the final pool size and the amount of tickets on each horse as each race is run, meaning you can see how you are fairing with the rest of the players through the meeting.

To work out how much your return is – multiply your stake per line by the amount of winning lines you have. Your winnings will then be either that percentage of the published £1-stake winnings or a multiple of the published dividend.

How Many Lines Should I Have In My Placepot?

Some horse racing punters will attempt just a single line, which means selecting just one horse in each of the six races. This ‘straight line’ bet can be a tricky ‘all your eggs in one basket’ approach, but if you do get through all six races with a horse placed then you are generally rewarded well.

On the opening day of the 2019 Cheltenham Festival, one punter staked one £2 line and managed to select four winners and two runners-up in the first six races.

That said, most Placepot punters often like to make multiple selections in the races with more horses in as this will give them a better chance of getting a horse placed.

For the bulk of Tote Placepot punters, the balance is keeping an eye on the number of selections and the total stake – it’s tempting to put 4 or 5 horses in some races, but the perms on this can quickly add up which means your final stake will be very high.

With that in mind, if there are certain races with a hot favourite in, then many like to take a punt on just having this one horse in which will keep costs down.

Note though, if these hot favourites blow out then this will knock a lot of people out and, therefore, increase the final pool dividend a lot.

As mentioned in the previous section, when a fancied horses fails to place this is where the Placepot final payouts can get massive.

Sometimes it’s a juggling act of playing safe and following the crowd or taking a chance of a hot favourite not running well and, in the process, increasing the final pool dividend.

Let’s be honest, it’s not hard to pick a favourite in each of the six races, but if they do all place, then the chances are that you’ll be sharing this Placepot

Have Multiple Lines In Big-Field Races

The beauty of having one or two banker legs though (1 pick in a race) is that this frees up space for a potential big handicap race later on in the card – meaning you can possibly have 3 or 4 picks in that race to increase your chance.

Remember though, if you have 3 or 4 picks in a certain race and two get placed then you get both lines going through to the next leg – which will increase your final payout.

A good example of this are races at the Cheltenham Festival as most days there is a mix of so-called Festival bankers and big-field handicaps, where 20+ runners or more are entered

Betting on Cheltenham? Check out the latest Cheltenham betting offers and free bets.

What Happens To Placepot Pick Non-Runners?

If one of your Placepot selections is a non-runner, then that horse will revert to the SP favourite. If there are joint or co-favourites, the lowest racecard number carries your money.

So, if horses numbers 1 and 4 are joint-favourites, it is horse number 1 that will take place of your selected non-runner.

Already looking at the Cheltenham Festival?

Check out all the latest info for the Cheltenham Festival including odds, tips and betting offer for the biggest event on the racing calendar.