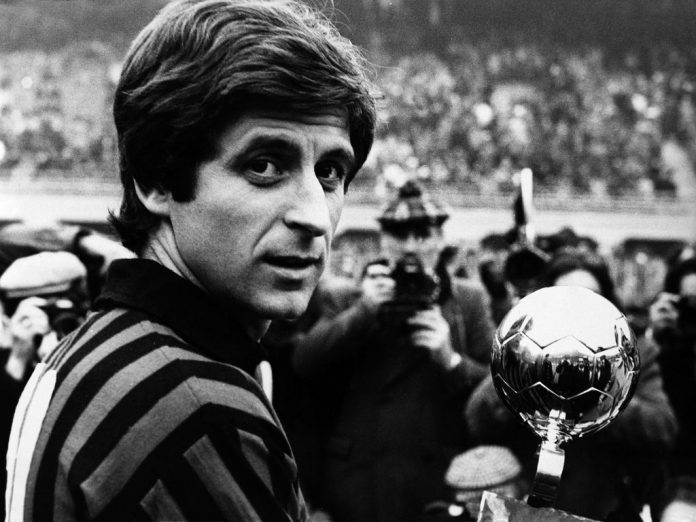 One of football’s all time greats Gianni Rivera was born on this day in 1943. Son of a railway worker, Rivera grew up in the Piedmontese town of Alessandria where he began his footballing career with ASD Don Bosco.

There he caught the eye of former AC Milan midfielder Franco Pedroni who then worked as the assistant coach of U.S. Alessandria Calcio 1912 – Rivera’s hometown’s major football club.

Blessed with outrageous skill, Rivera began his professional career in 1959. Italian football’s ‘Golden Boy’ made his debut for Alessandria against Inter Milan at the tender age of just 15 years and nine months. He is still the third youngest player to make a first team appearance in Serie A after Amedeo Amadei and Pietro Pellegri.

Already a world class midfielder, Rivera joined Milan in 1960 and stayed there until the end of his career amassing a total of 658 appearances and scoring 164 goals. I Rossoneri won three Scudettos, four Coppa Italias, two European Cups, two UEFA Cup Winners’ Cups and one Intercontinental Cup with him as the team’s talisman.

Rivera also won the prestigious Balon d’Or award in 1969 and the UEFA European Championship with Italy in 1968.

On 28 March 1979, Reading beat Grimsby Town 4-0 in an English Division Four fixture. Little did Reading’s goalkeeper Steve Death know that this clean sheet was the first of many that would eventually set a Football League record. Death’s proverbial shadow across The Royals’ goalpost forestalled anything that threatened its integrity. Reading went on an unbeaten run of seven wins and three draws without conceding a single goal, thus winning the Division Four title.

This was the longest clean sheet record in English football until Manchester United’s Edwin van der Sar broke it three decades later in 2009.