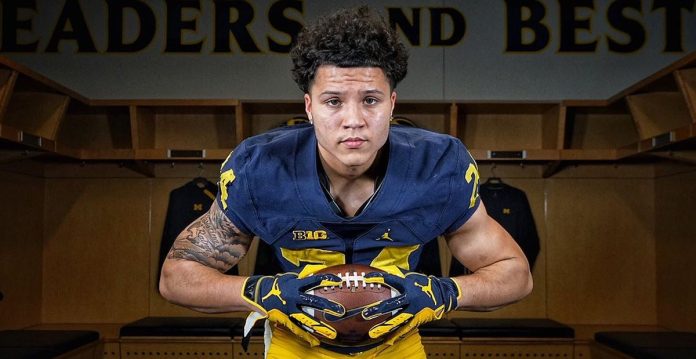 One of the premier running backs in college football is set to return next season. Michigan Wolverines running back Blake Corum will forgo his option to enter the 2023 NFL Draft and return for another season in Ann Arbor. Corum was in the running for the Heisman Trophy as this season drew to a close, but got injured down the stretch, derailing his Heisman bid. Corum will team up with head coach Jim Harbaugh, who has recently stated his intent to stay at Michigan despite heavy interest from NFL teams.

Blake Corum was well and truly in the Heisman race ass the season was entering its final weeks. However, the junior suffered a torn meniscus in a game against Illinois that required season ending surgery. Corum still managed to finish seventh in the Heisman Trophy voting.

Michigan fans will be delighted to hear that he will be returning to Ann Arbor for his senior season. This season, Corum rushed for 1,463 yards at 5.9 yards per carry and totaled 19 touchdowns on the season. All of that production will return in the 2023/24 season.

“I have spent a lot of time thinking and praying about my future,” Corum said in a statement on Twitter on Monday. “I want to thank my loved ones for unwavering support during this process. My goals have always been about leaving an enduring legacy as the winningest program in the history of college football.

“Motivated by my profound love for Michigan and commitment to my education. have decided to refurn for another season It is an honor to be a student-athlete at the University of Michigan! I look forward to continuing my work in the classroom. on the field, and in the community. I am grateful for my Michigan teammates and coaches.”

Between Blake Corum and Donovan Edwards, Michigan’s backfield will be loaded for at least one more season. Edwards was superb all year backing up Corum and then taking over when necessary. Coach Jim Harbaugh, who has recently declared his commitment to Michigan after interest from NFL teams, will be delighted to have his workhorse back as Michigan look to improve on this year’s CFP semifinal finish.