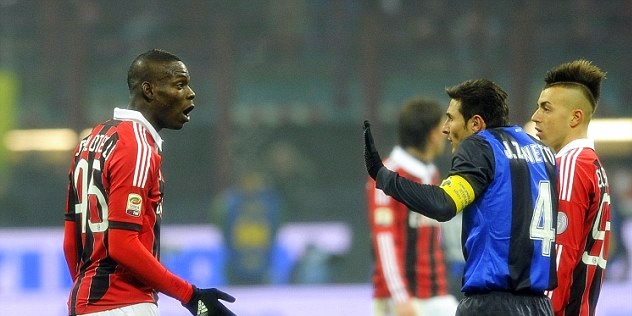 Racism in football reared its ugly head once again, and this time on the occasion of one of the world’s most watched games, the Derby della Madonnina.

In Sunday’s derby at the San Siro, Inter Milan fans were involved in the deplorable act of waving inflatable bananas at their ex-striker Mario Balotelli, reports the Gazzetta dello Sport. Balotelli was clearly affected by such barracking, and responded by pressing his finger to his lips in an apparent gesture to tell Inter fans to shut up. Also, he was seen spitting in the general direction of the Inter Milan fans.

If the charges of racist gestures or use of racist language by Inter fans are proven, the club might be subjected to a fine of at least € 15,000. Quite the paltry fine for an incident of such magnitude one must say, also judging by precedents fines hardly act as a deterrent in the fight against racism.

The club face similar fines when its fans uttered racist chants against Balotelli in the Serie A match against Chievo, just after Balotelli had moved from Manchester City to AC Milan. Not that the Milanese contingent took a very anti-racist stance, with the club VP Paolo Berlusconi heralding the arrival of Mario by conferring him the title of ‘Negretto Della Famiglia’ (the family’s little nigger).

Optimists believe it’s only a minority of football fans who are racist and bring the game shame and opprobrium, but the fact remains this so-called ‘minority’ section is making its presence felt pretty frequently.

Perhaps the right way to combat in-stadia racism is the manner in which the Bulgarian authorities are planning to go about – that of appointing match delegates who might abandon the fixture when they sense racist behaviour in the stands.

The Bulgarian FA (BFU) said in a statement:

“BFU’s delegates will order the (stadium) speaker to warn the crowd. Cases of racism and discrimination can lead to termination of the game and fines of 37,500 levs (£17,000).”

That might be touted as extreme measure by a section of the media or any other stakeholder(s), but viewed in the broader spectrum, football is but a game and racism is a crime that puts the dignity of an individual(s) under stress.

If football games become one of the sources of the racist brigade to raise their voice, the ‘Bulgarian way’ would be the most simplistic yet tangible solution to the problem.