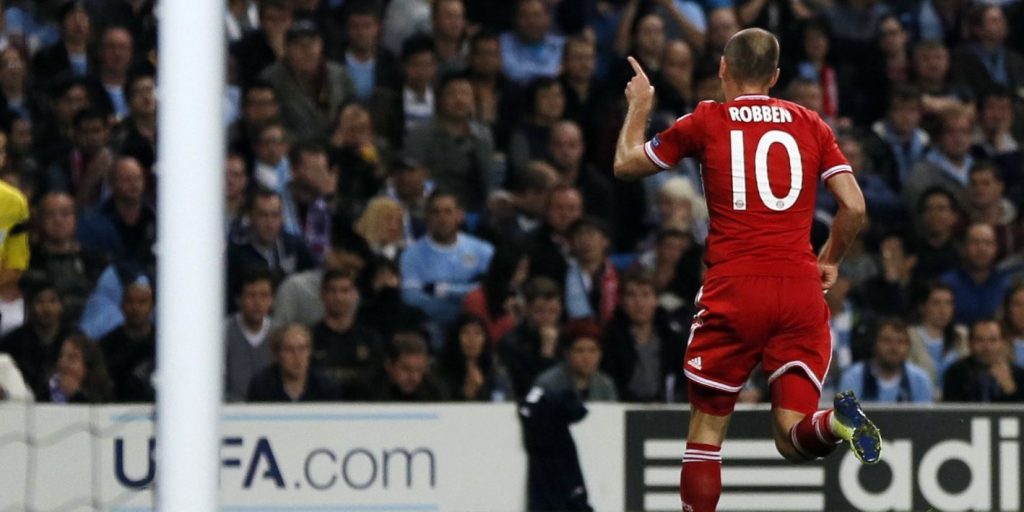 While Manchester United have suffered horribly this season in the Premier League, their European adventures have brought them real joy over the past few months.

Their Group A exploits saw them batter Bayer Leverkusen in their own back-yard, shatter Shaktar Donesk’s dreams of reaching the knockout round in the final match, and ease past a spritely Real Sociedad; a triumvirate you would have thought would have caused more problems considering David Moyes’ side’s struggles in beating the likes of Fulham and West Brom this season.

With Olympikoas overcome in the most dramatic of fashions last month after an initial United meltdown at the Karaiskakis Stadium in Piraeus, the Red Devils cheerfully took their place alongside arguably the seven most potent European forces on the planet for the next round.

But now here we are, stony faced and expectant, with the Bayern tank trundling down Sir Matt Busby Way, ready to subject United to an evening they won’t soon forget.

How will David Moyes contain the beast? How can United quell such a vibrant attacking power for an hour and a half tonight?

Well, firstly they have to do it without the suspended Juan Mata and the injured Robin van Persie, two parts of their holy attacking trinity, with Wayne Rooney charged with leading the line solo this evening.

Rooney is probably one of the five footballers I’d want in a situation such as tonight, along with Steven Gerrard, Didier Drogba, Juninho Pernambucano, and Pippo Inzaghi.

A strange list indeed, but with Inzaghi’s ultimate instincts in front of goal, Gerrard’s heroism in the middle of the park, Drogba’s penchant for bulldozing, Rooney’s ‘never say die’ attitude, and Juninho’s ability to get a goal from pretty much anywhere, I’d fancy my chances against anyone.

Attacking midfield trio Adnan Januzaj, Antonio Valencia, and Shinji Kagawa are expected to line up behind Rooney, and they will have be lightning quick on the ball, with reflex actions key against the all-powerful Bayern. Rooney is at the peak of his powers, as we saw against Villa on the weekend, and will only thrive as the quality of the opposition improves.

The England man will also be eager to prove that he is more than capable of getting the goals in the absence of the injured RVP.

With a fired up Rooney up top, desperate to make a point, United have the potential to knick a goal against a side that, as we saw in the first 20 minutes against Arsenal last round, can be rather slow out of the blocks.

The opening exchanges will arguably shape the game, and United will have to punish any sloppiness from the German champions if they are to have any hope of surviving the night.

Realistically, Bayern Munich will score at Old Trafford. Their ludicrous goalscoring rate this season demands it. This means United need to put away at least two to make the return leg a contest. 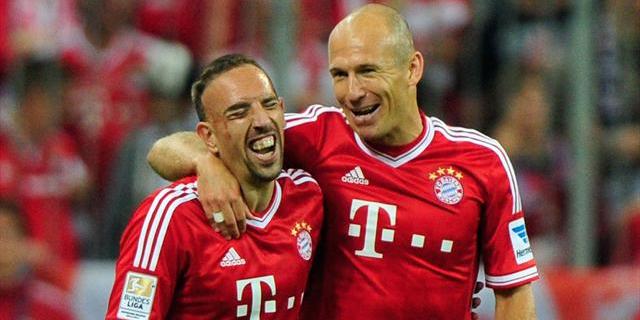 Easier said than done of course, but I think its well within their capabilities, so long as they get that early goal, before Bayern settle into their rhythm.

The German’s passing is lethal in itself, with Bayern crushing the life out of games, as Pep Guardiola’s fabled ‘tiki-taka’ football rears it’s head once more. While Barcelona stifle opponents with what is now often perceived as footballing monotony, Bayern are much more energetic with their possession, and much more eager to make that killer pass.

In comparison, United keep possession as well as a cat can keep hold of a piece of string. The two sides combined, only Michael Carrick enters the top ten in passers of the ball in Europe this season.

Take a look at this passing graphic from Bayern’s 3-1 win at Hertha Berlin a week ago. I mean, it looks like a spider went a little mental for red smarties… 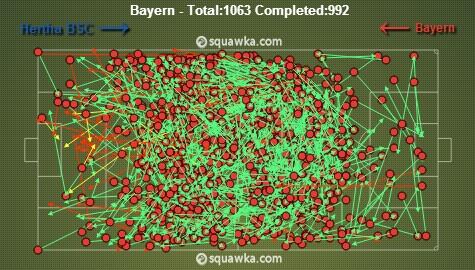 It is going to be a long night for United fans everywhere, but as Teddy Sheringham and Ole Gunnar Solskjaer will rightly tell you, possession really isn’t everything.

What do you think? Get voting, and let me know your thoughts in the comments below…