Brazilian midfielder Fabinho has been linked with a move to the Premier League.

The Monaco star is thought to be a target for both Manchester clubs and the player’s father has now added to the speculations with his comments.

As reported by L’Equipe, the player’s father has admitted to liking Manchester United and especially what Jose Mourinho has done at the club. However, the player and his father also have a weakness for bitter rivals Manchester City. 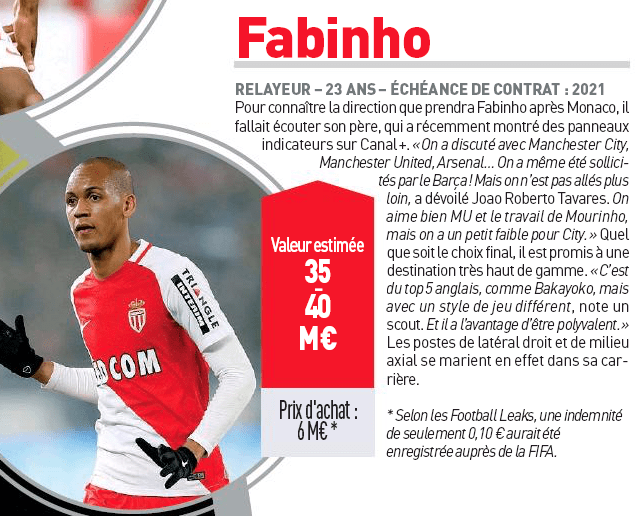 The highly talented defensive midfielder is being watched by several other European clubs. But it seems that the chance to work with Pep or Mourinho is enticing to the player and his father.

Fabinho was converted from a right back by Leonardo Jardim and the 23-year-old has been a key player for his club ever since.

The report from France claims that a transfer away from Stade Louis II is quite likely this summer. However, Monaco won’t sell for cheap.

The French outfit forked out €6m for Fabinho and will be looking to sell him for €35-40m.

Manchester City and Manchester United are both in need of a defensive midfielder and signing Fabinho could be a major boost for them. The strong South American contingent at City could provide them with an edge in the battle for Fabinho.

Furthermore, Manchester United will also need to ensure a top-four finish in order to rival City for the player.