One more win will wrap up fifth position for Liverpool and automatic qualification into next season’s UEFA Europa League.

A top-half finish for Crystal Palace is looking unlikely as they head into the weekend five points behind 10th place West Ham and on a four-game losing streak.

Liverpool have won only one of their last five and that came against relegated Queens Park Rangers. Brendan Rodgers’ side earned a respectful draw at Premier League champions Chelsea last Sunday but their disappointing end to the season has cost them Champions League football next season. However, this is Steven Gerrard’s final home game so there will be plenty of interest in this game. If you’re traveling to the game and need a room in Liverpool, check TravelMag.com’s hotel recommendations.

Mamadou Sakho remains sidelined. Alberto Moreno was an unused substitute last weekend and hasn’t played in any of Liverpool’s last four games. Rodgers has been sticking with a back four in which Glen Johnson plays the left-back role.

Daniel Sturridge is the only other absentee for the Reds. The England international is not due back until September having recent undergone successful hip surgery. Rickie Lambert started up front at Stamford Bridge last weekend.

Alan Pardew has no injuries in his first-team squad. Marouane Chamakh made his return from injury to play a cameo role in their defeat to Manchester United last Saturday that ultimately ruled out Liverpool’s hopes of a top four finish. Fraizer Campbell is also available to the former-Newcastle boss. 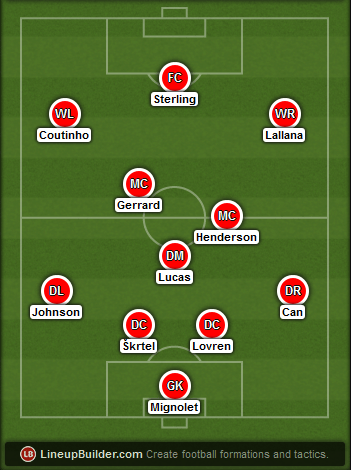 You could say the 4-3-3 formation worked for Liverpool last weekend as not too many teams have come away from Stamford Bridge with as much as a point this season. Arguably, Chelsea had already won the league. Otherwise, it’s not been very successful at all recently, even leaving their victory over out-of-form Queens Park Rangers until late. We expect Brendan Rodgers to stick with it. Glen Johnson bombs on from left-back whilst Lucas sits in front of the back four. This would be Steven Gerrard’s last game at Anfield assuming he plays. Raheem Sterling would be more suited to facing the Crystal Palace centre-backs instead of trying to force Rickie Lambert to compete aerially with them. 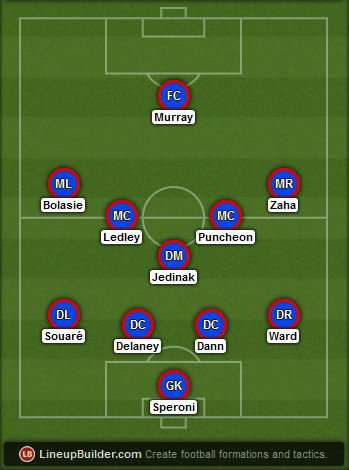 Alan Pardew plays a 4-5-1 formation, or a 4-3-3 formation when Crystal Palace are in possession of the ball. Mile Jedinak started again last week after seemingly falling out with the manager. He is an integral part of protecting the defence. The Eagles could struggle with Liverpool’s pace on the attack. They have pace down the wings themselves with both Yannick Bolasie and Wilfried Zaha both very useful players. Glenn Murray has been good up front in 2015 but was denied by one of the saves of the season from David de Gea last weekend.

Raheem Sterling vs Damien Delaney
Should Raheem Sterling start up front we will be looking for him to use his pace to make runs in behind Damien Delaney, as well as taking him on. The 33-year-old Irish centre-back has been beat a few times this season and doesn’t always make a cynical foul to prevent the opposition getting past him either. Partnered by Scott Dann, they are a defensive partnership that are solid in the air but not suited to defending pacey strikers running at them.

Philippe Coutinho vs Joel Ward
The Crystal Palace full-back had a respectable game versus Eden Hazard a fortnight ago but was torn apart by Ashley Young last Saturday. The Manchester United winger got behind his full-back before his cross struck the hand of Scott Dann to win a penalty, before finding space to set up Marouane Fellaini’s winner from a cross out wide. Philippe Coutinho certainly has the skills and crossing ability, as well as a deadly long-range shot, to get the better of the Crystal Palace right-back this weekend.

Yannick Bolasie vs Emre Can
Not too many notable performances since his hat-trick versus Sunderland but Yannick Bolasie could certainly be a useful threat against the Liverpool defence this weekend. Emre Can has been known to leave space behind him and isn’t always comfortable defending wingers running at him. Bolasie loves to do just that, over and over again so we think the Congolese international will cause Liverpool problems this weekend.

1 – Steven Gerrard has recorded only one assist in his 27 Premier League matches this season. That came against Queens Park Rangers back in October.

4 – Dwight Gayle has scored four goals in three Premier League matches versus Liverpool. He has scored only eight more goals in 45 games against the rest of the teams in the top flight over the past two seasons.