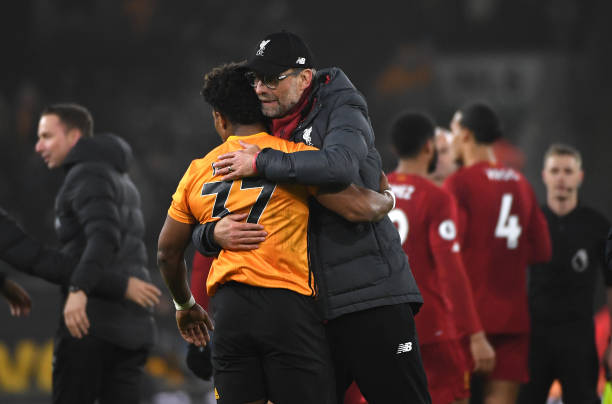 Liverpool will be looking to improve their squad when the transfer window reopens in January and the Reds have been linked with a host of names already.

The Wolverhampton Wanderers winger has been linked with a move to Anfield for months now and it appears that the Reds could finally get their man on a cut-price deal.
According to Football Insider, the Molineux outfit are looking to cash in on the Spanish international because of their financial crisis and they are prepared to let him leave for a fee of around £20 million.
The 25-year-old has proven his quality in the Premier League with Wolves and he could prove to be a useful acquisition for the Reds.
Liverpool are set to lose the likes of Mohamed Salah and Sadio Mane during the African Cup of nations and they could certainly use another quality attacker in January.
The Reds are currently in the Premier League title race and they are just two points adrift of league leaders Chelsea. Jurgen Klopp will not want his side to slip up because of the lack of depth during the second half of the season.

The Porto attacker made quite a name for himself with his splendid performances during the Copa America and he has shown his quality in the Champions League with the Portuguese giants as well.
As per Record (via Liverpool Echo), Klopp believes that the attacker could improve his squad and it remains to be seen whether the Reds can agree on a deal with Porto.
The Reds could definitely use more depth in the wide areas and the Colombian international could be a handy option for Jurgen Klopp.
Diaz will add goals, creativity and pace to the Liverpool front three and he could be particularly useful for Liverpool during AFCON if the Reds manage to sign him during the January transfer window.
The player has a release clause of around £67.6million.
Join our Telegram channel to stay up to date on the latest in marketing