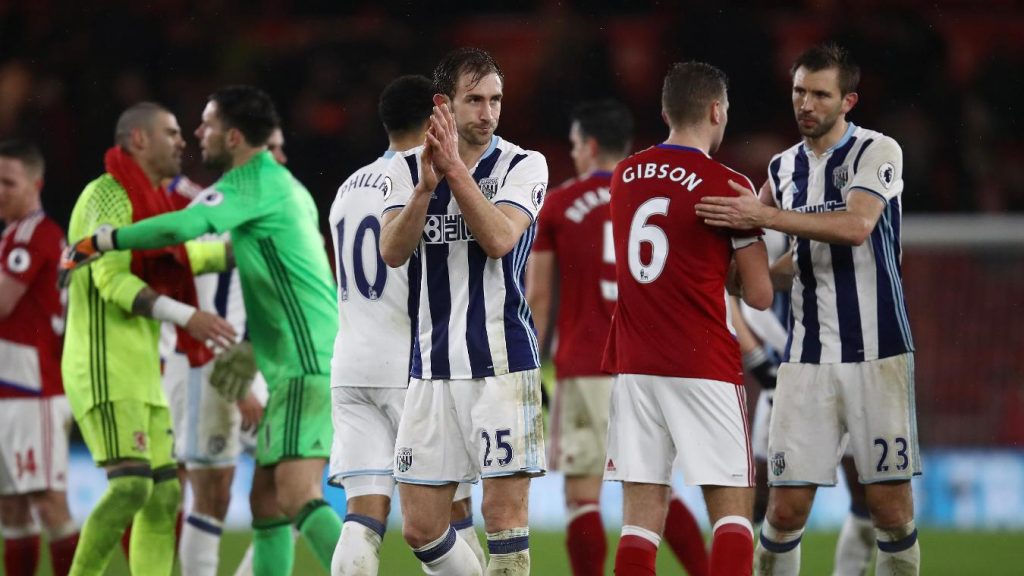 West Bromwich Albion centre-back Gareth McAuley has set his sights on the club’s best ever finish in a Premier League season.

The Baggies are currently eighth in the table with 40 points, but McAuley and his Albion team-mates are determined to better the club’s top-flight record haul of 49 points this season.

“Fifty points would be our best ever finish and yes, we have discussed it as a group amongst ourselves. We want to beat the 49 and we’ve got 12 games left to do it,” said the Northern Irishman in an interview with the Telegraph.

Tony Pulis’ side have been one of the surprises of this season and are comfortably placed for a top eight finish, a commendable feat considering they finished 14th, 13th and 17th in the last three seasons.

Despite their current lofty standing in the league, the 37-year-old McAuley is not letting up and settling down after crossing the safety mark of 40 points.

“Forty points is important but let’s not settle for that, let’s aim higher.”

Pulis has steadily built Albion into one of the most difficult clubs to play against in the Premier League, and that can be attributed to his and the club’s smart recruitment policy.

While the Saido Berahino saga masked other transfer developments at the club for a long time, Albion have strengthened their squad with the signings of Salomon Rondon, Jonny Evans, Nacer Chadli and Darren Fletcher over the past three seasons.

McAuley, who is still going strong at 37, believes the key to Albion’s good recent form can be attributed to the winning mentality of his new team-mates. That has led to the Baggies’ ruthlessness against the league’s lesser lights. They have lost only once—to Bournemouth in September 2016—to teams below them in the table this season.

“We’d struggled to beat the teams in mid-table to the bottom in recent years but people like Jonny [Evans], Fletch [Fletcher] and Nas [Chadli] have come in and raised it. They were used to beating teams down there and it’s moved everybody’s mindset,” added McAuley.

With a Europa League place in sight, Albion would need more than their 2012/13 season’s total of 49 points to qualify for Europe next season.

This Saturday, they host struggling Crystal Palace, a club whose fortunes Pulis once oversaw but have struggled ever since the Welshman was let go.

From being a yo-yo Premier League club in the 2000s to presently dreaming of a Europa League spot, Albion have come a long way under Pulis. And as McAuley said, their want for more is what is at the root of their recent positive developments.