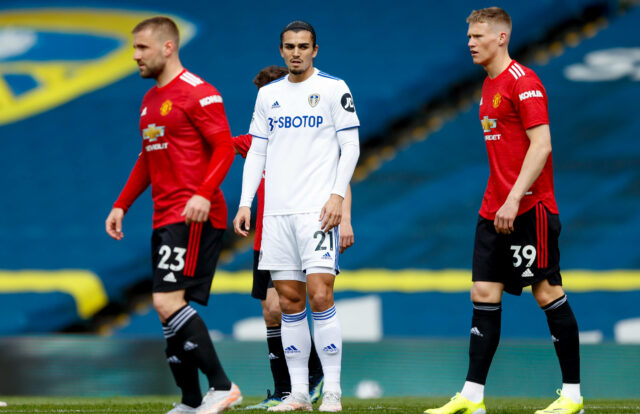 Leeds United recorded a 0-0 draw against Manchester United in the Premier League at Elland Road on Sunday.

In the previous encounter between the two sides, Leeds suffered a humiliating 6-2 defeat at Old Trafford. The latest result shows that they are learning from past errors and evolving as a Premier League force.

Marcelo Bielsa’s side have been in fantastic form against teams in the top six since the turn of the year, having won at Leicester City and Manchester City, as well earning draws against Chelsea, Liverpool and now United.

Many Leeds fans were pleased with Pascal Struijk’s performance, who was simply superb alongside Diego Llorente at the back.

Bielsa praised Struijk after the game, saying his display was “aggression without violence”.

The 21-year-old has made 22 appearances in the Premier League this season (including 19 starts), and he is getting better with every game.

While Struijk has also played as a defensive midfielder, it is getting clear that he is more comfortable in the central defensive role.

Here are some of the selected tweets from the Whites fans:

Exceptional display and growing with every performance. Such a talent. 👊 #LUFC pic.twitter.com/n8mzO8Yijh

No frills from Struijk today but he’s become a rock solid defender and it’s his shirt to lose now. Positional very good, rarely wastes a pass & reads the game so well. Doesn’t get the credit he deserves. Llorente comfy alongside him.
A huge, unexpected bonus for #LUFC this season

Shout out to the man mountain that is Pascal Struijk. More interceptions and clearances than anyone else 👏🏼🏔

The result means Manchester City will be crowned Premier League champions next weekend if Pep Guardiola’s side beat Crystal Palace on Saturday and United lose at home to Liverpool on Sunday.

In other news, Leeds, Everton and Rangers want Moumi Ngamaleu.