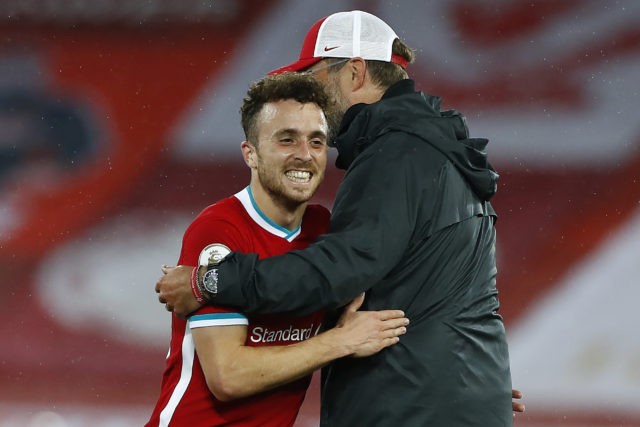 The Reds won 3-1 against the Gunners in the Premier League on Sunday at Anfield as they maintained their perfect start to the season.

The 23-year-old, who joined from Wolverhampton Wanderers during the summer transfer window, made his Anfield debut after he came on as a substitute to replace the impressive Sadio Mane in the second half.

Jota scored the winning goal to make a perfect start to his Liverpool career. In fact, he could have added another goal to his name but only managed to hit the side net from close range.

Liverpool boss Jurgen Klopp was full of praise for Jota after the match.

Klopp feels that Jota is only at ‘20 per cent’ in his understanding of his new team’s approach and that he has still much to learn.

He said to the Evening Standard: “Jota came on, just played natural, his football. [He] tried to defend the way we defend.

“He’s on 20 per cent of information on what we do exactly. We had meetings to talk about but it all will take time and today he had like 60/70 minutes’ time to see how Sadio is doing it, and came on the pitch and did incredibly well.

The £45m signing has become the 13th player in Liverpool history to have scored on his Premier League debut.

The Gunners, who had won their opening two league games, went ahead after 25 minutes when Alexandre Lacazette took advantage of Andrew Robertson’s error to score from close range.

The Reds went ahead before half-time when Robertson managed to get on the end of Trent Alexander-Arnold’s cross to beat Leno.