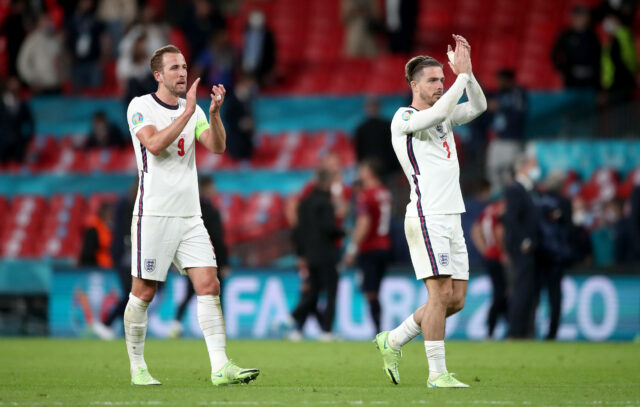 Jack Grealish has spoken highly of his England teammate Harry Kane, saying he is an “unbelievable” player.

The Aston Villa attacking midfielder made a huge impact after he came on as a substitute against Germany in the last-16 of Euro 2020 at Wembley Stadium on Tuesday.

He was involved in the build-up play for Raheem Sterling’s opening goal and also provided the assist for Kane, as England won 2-0 to set up a quarter-final clash against Ukraine.

Grealish has said that Kane is the best player he has ever played with and that he is ‘buzzing’ for the England skipper after he opened his scoring account.

“To get his first goal of the tournament, he will be buzzing, but no-one in there would ever doubt H,” Grealish said, as quoted by The Mirror.

“He is the best player I have ever played with. He is unbelievable. He is an unbelievable professional on and off the pitch.

“I am buzzing for him that he has obviously got the first goal. Hopefully, for all of us, there are many more to come.”

Kane & Grealish off to Man City?

Both Kane and Grealish enjoyed a fantastic 2020-21 campaign for their respective clubs, but they could play together next season at Manchester City.

It has been widely reported that the Premier League champions are keen to sign both Grealish and Kane this summer.

Pep Guardiola is a keen admirer of Grealish, and City could make a bid for him.

However, Villa are reluctant to lose their asset, and they are likely to demand a fee in the region of £100 million.

According to a recent report from the Daily Mail, City are willing to meet the price for Grealish.

City are also keen to sign Kane and have already had a £100m bid rejected.

It has been reported that Daniel Levy could soften his stance if Spurs receive a fee of around £150m for their talisman striker.

Read: Daniel Levy has told Nuno Espirito Santo that Harry Kane will not be sold.