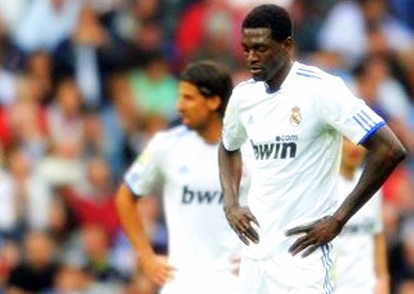 On loan from Manchester City, the 26 year old striker Emmanuel Adebayor talks about his time at Real Madrid and how long he wants to stay. How everyone from Arsenal to Madrid is proud of him, his thoughts on the upcoming Real Madrid v Tottenham Champions League match and more.

You landed in a different atmosphere with new team mates, some are the best – Kaká, Cristiano Ronaldo, Iker Casillas, Sergio Ramos – Which one has impressed you the most?

I think all of them, they are all world class players. Casillas has been unbelievable for ten years but in the last three years he has even improved his football. He won the European Championship and the World Cup 2010 in South Africa.

If you ask me who impressed me most, I think it is him because his body language does not show that he has any ability on the pitch. I used to play with Jens Lehmann, Almunia, Shay Given, they always went to the gym but Casillas does not do much work in the gym, anything that he does is more natural – so he is very, very good. I am very impressed by him.

For the rest of the players, we all know Ronaldo, he can score from everywhere, he can decide games alone. Then Kaka, one of the best players in the world, so I am very happy to be among them here. Defensively Sergio Ramos is fantastic, he is very strong and very good with the dribbling as well. I am really impressed by all of them.

Premiership v La Liga. What are the fundamental differences you have found playing as a front man for Madrid as opposed to Arsenal and Man City?

So every league has its own kind of football. Both leagues suit me, when it is physical I am ready, when it is more technical, I think I am not bad either. So I am glad to be here.

You’ve played for Man City and Real Madrid this season. Which of the two clubs’ top scorers – Ronaldo or Tevez – have you most enjoyed playing alongside?

Carlos Tevez is a fantastic player, I enjoyed playing alongside him for 1,5 years. He has his own personality, for me he is one of the top scorers in the world. Ronaldo is always successful, in the Champions League, in the Liga, in the King’s Cup.

What are the main strengths of Emmanuel Adebayor as football player?

That is difficult to say, I am lucky to be tall so I am not bad in the air, I am not slow either, technically pretty good. Furthermore I am a good finisher as soon as I have the chance to score; that is what I play for, I am a striker.

When I have the chance to score a goal, I have to finish it. This question is very difficult to answer, it would be better to ask the journalists who attend training and the matches and they can tell you better what my strengths are.

Which Tottenham players do you believe pose the biggest threat to Real Madrid and why? What is the strength of Tottenham as a team?

When I was playing in England I always loved a lot of Tottenham players, especially Peter Crouch. I do not know why but I love this guy. He is not that quick but he is very tall, believe me, even taller than me!

He just has this ability of dribbling, doing everything in slow-motion, he is very good, and in the air, you know him, there is no way to win the battle against him. He will cause lots of trouble to us, we need to manage to win the header because as soon as he starts winning the header in our area it will be very difficult for us.

Furthermore, Gareth Bale, who is in good shape at the moment. Running a lot, attacking from the back. They have a lot of good players like Defoe, I respect him a lot, he has one chance and scores one goal. We have to be very careful but we have a great team, a great team spirit, we are ready for the battle!

Tottenham in general, they are playing very well as a team, they attack together, they defend together. They never stop playing for 90 minutes, you can win 2-0, 3-0, they never give up.

That is what we have to know, that they never give up no matter the score. They will play to the last whistle; that is not only Tottenham, that is a general mentality of British football, they always keep playing until the end of the game.

Are you going to score against Tottenham?

I had a good record against Tottenham when I was playing for Arsenal. Tottenham is a fantastic club, I respect them a lot. When I was at Arsenal there was a big rivalry between the two clubs with big derbies.

I always had the chance to score and I hope to do so in Tuesday but all that matters for me is that Real Madrid go through, it does not matter if I score 1, 2 or 3 goals. All the club and the fans need is to go to the semi-finals and I hope that I can contribute to that.

Do you think that it is key to get a good result in the 1st leg match in order to pass the round?

Definitely yes, I think if you have the chance to play the first leg at home, you need to make a big difference straight away, not to relax but to make it easier for yourself. At Tottenham it will be tough anyway, the fans will be behind them.

It is very important that we play the first leg at home. We have to show personality, to show that we are Real Madrid and play our game, score lots of goals. I do not know how the match will finish but we have to win.

Inter, Chelsea, Manchester United and Barcelona seem to be the biggest threats on your way to the title. Which one do you fear most?

If you get to this stage there is no fear anymore. To be champions of the champions you have to beat everyone. We know that it’s going to be difficult but we do not fear anybody.

Of course it is difficult to play against teams like Manchester United, Chelsea and Barcelona but I do not fear them. We just have to play eleven versus eleven, all teams have good players on their side. You just have to believe in yourself, if you start fearing there is no point going out and playing.

Wembley could be Real Madrid’s next visit to London this season. Do you dream of raising the 10th Champions League title for Real Madrid this year?

This year I have the chance to bounce back again and have to give everything it takes to finally win. The third one has to be the right one and I hope that this year is right for me.

Especially coming back to Wembley, just around the corner from where I lived, of course I would be more than happy to get out there and hold the Champions League cup in my hands. That would be the best gift ever in my life!