They called him “Joe Red” during his time at Manchester United. Villareal still have to come up with a nickname for the young Italian, but Giuseppe Rossi just can’t stop scoring in La Liga: the ex-Red Devil striker produced yet another tally this week-end. And what a goal that was.

The Yellow Submarines were travelling to Pamplona for a difficult game against Osasuna Sunday. With the score still tied on 0-0, here’s what the New Jersey native pulled out of his bag of tricks: grabbing the ball close to the midfield line on the right, Rossi made a diagonal run towards the left, accelerating forward with an enormous burst of pace. The two nearby Osasuna defenders never even got close to him, and when they did it was too late: Rossi had gotten to the edge of the box, unleashing a powerful yet accurate low shot into the bottom right corner. Surely one of the best goals of the week-end.

Unfortunately for Rossi’s team, Villareal conceded the equalizer under a minute later, and eventually ended up losing the game 3-2. The Yellow Submarines are now 3rd in the Liga standings 4 points behind leaders Real Madrid, and owe a large part of their current match form to the Italian striker. Rossi is currently tied for 2nd (with Sergio AguÃ«ro) in the Pichichi standings with 5 goals in 7 Liga matches, within 1 goal’s reach of current topscorer Lionel Messi. 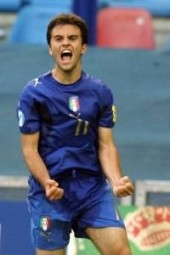 The Spanish press can’t stop singing the young Italian’s praises, tagging him as one of the best surprises of the season debut: described as a calm and reserved person outside the pitch, Rossi’s near lethal accuracy near the 18 yard box is often appreciated in conjunction with his playing style, his commitment to the team effort, and his technical ability. “We are standing in front of one of the league’s great stars” titled Marca, while As wrote “He passed by so quickly that the opposing team didn’t know which Rossi it was, Valentino or Giuseppe“.

Much like what you’d expect from a shy & reserved person, Rossi isn’t easily enthused by his recent excellent performances, and is just keen on continuing the good work. In an interview with Gazzetta dello Sport the young Italian striker briefly talked about his role in Azzurrini squad (Italy’s Under 21) and the possibility at getting a call-up from Donadoni. “My main goal is to try my hardest and attempt to score, I try to not to think about the rest. The Azzurri squad is a dream for me at the moment, I must remain with my feet on the ground and continue to work hard. (…) I met Donadoni in the Netherlands, while I was practicing with the Under 21 squad, I haven’t seen him since then. I don’t know if it’s too soon to receive a phone call from him, but I’m not worried”.

Last week, in an El PaÃ­s interview Rossi was asked “Did Donadoni give you a call?”. To which the youngster replied “No, I play for the Under 21”. If Rossi keeps his current match form, that fact could change in a very near future.

A question for Manchester United fans: what’s your opinion of Giuseppe Rossi? Do you wish he was still playing at Old Trafford, or was he too young & inexperienced to be given a starting role with United? In light of his excellent recent matches with Villareal, did Ferguson make a mistake in selling him? 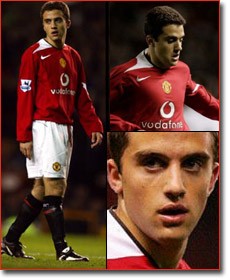 Giuseppe Rossi was born in 1987 in Teaneck, New Jersey from Italian immigrants. When offered a spot on the youth team of Parma, Rossi and his family moved to Italy until Manchester United bought him in the Summer of 2004, while he was still 17. Earning a weekly salary of £200,000, Rossi enjoyed prolific form in the Youth and Reserve teams but had limited chances with the senior side, although he always impressed whenever he made an appearance in cup games.

His first goal in the English Premiership came on October 15, 2005, on his league debut vs. Sunderland. The match ended 3-1 for the Red Devils, and finally openly revealed the young Italian’s talent to the media. Rossi scored again against Barnet FC in the League Cup (October 26, 2005) and got a double against Burton Albion FC in the FA Cup (January 18, 2006), earning a man-of-the-match award for his performance. Rossi spent the majority of his 2005-06 season playing games with the Reserve team, but managed to score 26 goals in 26 matches when called into action.

Sir Alex Ferguson said about him “Even though he may not be a very physical player, he’s very strong in the box and aerial play. He’s got short but incredibly fast steps, he’s tactically very smart and scores“. After renewing his 2-year contract with the Red Devils until 2010, Rossi declared he “was very happy to have extended the relationship between himself and the best team in the world.”

At the start of the 2006-07 season, Rossi moved to Newcastle United F.C. on loan for 4 months, where he was expected to gain some first team experience. He made his home debut on September 24, 2006 impressing all, showing his quick feet with a barrage of snap shots. Rossi scored his one and only Newcastle goal on his first start on October 25, 2006 against Portsmouth F.C. in a Carling Cup 3rd Round tie at St. James’ Park.

For the second half of the season he was again loaned out, this time to his former club, Parma, in a far more successful move. Scoring 9 goals in 19 league appearances, he helped the club escape the threat of relegation and confirmed many of the qualities that had originally caught the attention of Red Devils scouts. Because of this, and his desire to play regularly, Rossi was linked to a host of clubs in Italy and Europe.

On July 31, 2007, despite the youngster’s desire to stay at Old Trafford, Manchester United confirmed Rossi had been sold to Spanish club Villarreal for an undisclosed fee, reportedly around £6.0m. However, a clause was added to Rossi’s Villarreal contract that allows Manchester United to repurchase him at a later date.

Rossi scored his debut goal for Villarreal in the first week of La Liga on August 26, 2007.

Thanks to the English and Italian Wikipedia articles on Giuseppe Rossi for the biography info. Hat Tip to Gazzetta dello Sport for the article.