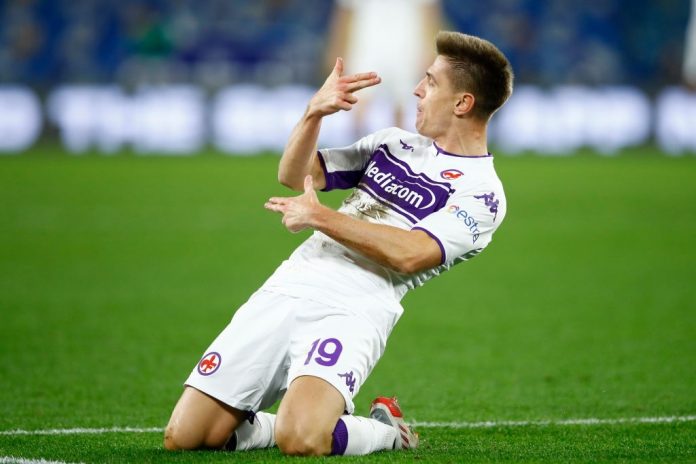 Krzystov Piatek has done well for himself during his loan spell with La Viola but a lot of things have to fall in place for a permanent move.

Fiorentina decided to sign Piatek once Dusan Vlahovic left for Juventus. The Serbian had scored goals for fun during his time at the club.

La Viola had always been interested in the player. Negotiations with parent club Hertha Berlin began a few summers ago but in the January transfer window, the two clubs reached an agreement – a six-month loan deal with a right to purchase for 15 million euros.

If they want to, the natives of Florence can exercise this by 1, June 2022.

Piatek for his part, is also eager to sign. He knows Italy well, having shone for Genoa where he scored 21 goals in 18 games before getting too greedy and joining AC Milan where he struggled. However, the Poland international has managed to rediscover some of his best form this season, scoring six goals in 11 games.

His performances have slightly helped the club in moving on from Vlahovic. The signing of Arthur Cabral was a good piece of business. However, the Brazilian needs time to settle in new surroundings.

Therefore, Fiorentina have opened a dialogue with Hertha Berlin once again where they are trying to get a discount on Piatek. Not just that, the player’s willingness to show his best version on and off the pitch has made it a no-brainer.

The Germans have also been enquired about the possibility of spreading the payment in three seasons, an additional benefit that is not always possible in every transfer deal.

Nonetheless, Fiorentina remain interested in Piatek even though they are looking at the profile of Agustin Alvarez of Penarol.