7 matchdays have passed in La Liga. While Real Madrid is perched at 1st spot with 19 points, the two Seville teams (Real Betis and FC Sevilla) have 12… if you add their totals together, that is.

While the fact Betis is underperforming doesn’t make much of a headline anymore, seeing the team of Juande Ramos with 6 points out of a possible 18 (Sevilla have one game at hand) is another matter. The team that won the last two editions of the UEFA Cup is undergoing one of their darkest periods of past years: 4 consecutive defeats in the Spanish league, and the apparent loss of the beautiful quick playing style that everyone fell in love with.

Sevilla’s current situation is all the more surprising because the Rojiblancos had started the season in the best of ways: it sounds incredible now, but the current Liga leaders Real Madrid were completely run over in the Spanish Supercup back in August (6-3 aggregate score over two legs, with a 5-3 victory for Sevilla at the Santiago Bernabéu).

After the Supercopa triumph (the Andalusians’ 5th trophy in 15 months, a record almost) Sevilla’s troubles began. First, the team was hit by tragedy with the death of Antonio Puerta, who collapsed for heart failure during the match against Getafe on August 25th. From then on, the Rojiblancos accumulated one defeat after the next: they lost the European Supercup to AC Milan, out of 5 games in La Liga they only managed to beat Recreativo Huelva, and despite the qualification to the UEFA Champions League, they conceded a pretty severe 3-0 loss to Arsenal at the Emirates Stadium.

Now, it should be stated that the tragedy of Puerta and his family had repercussions which were far more severe than a few negative performances on a football field. Precisely for that fact, the Andalusian club never tried to justify their recent bad run of form with the loss of their young left back. From that cursed August 28 date however, the day Antonio Puerta left this world, something changed. The team seems to have lost that little bit of ‘humph’, the little something that provided so much delight to all spectators across Europe, and the seductive play coupled with tactical acuity that made the Andalusian team double UEFA Cup champions in the past years.

In the past 2-3 years, the boys of Juande Ramos have earned the respect of their national and international colleagues. For that reason, any of the opponents Sevilla are set to face take the match very seriously: each and everyone of them comes onto the field with a little bit of something extra. A little something that Enzo Maresca & Co. are trying desperately hard to fight against. 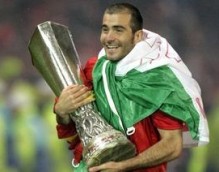 The Italian midfielder (who is suffering a bit of a dry spell lately in the Rojiblancos, often relegated to a benchwarming role), gave his impressions on the current Sevilla situation to the Spanish press and Gazzetta dello Sport. “People that think we may be able to repeat our last two extraordinary years would be dead wrong. No team is capable of winning so much and give a repeat performance so quickly” said Maresca. “People can comment what they see, and that’s good, but they mustn’t forget that in football, some things aren’t as easy as they appear. It doesn’t mean that our roster has decreased in quality: many clubs have a team full of stars, but they still struggle when they step onto the pitch.” argued the Italian player. “All we need to do is work our hardest, because that’s the only way we’ll ever see the light at the end of the tunnel”.

Maresca is currently out injured due to a muscular problem, but should be back to active duty in a couple of weeks, for the match against Levante. If there’s a team undergoing an even bigger crisis than Sevilla it’s precisely the ‘Granotes’: 1 point in the standings, only 3 goals scored and 17 conceded. A good ooportunity for Juande Ramos and his men to turn their season around… or get sucked into the quicksand for good.