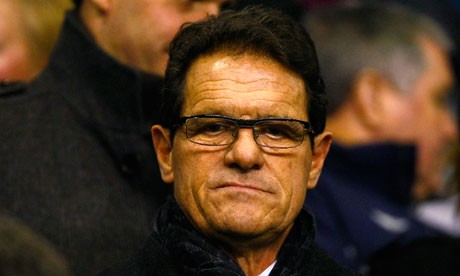 After leading Russia out of the 2014 World Cup without a single win, the Fabio Capello paradox seems to be stretching even wider. From a managerial genius of clubs to a managerial failure internationally, we uncover where Fabio has gone so badly wrong.

Though most England fans will primarily remember Capello for the wretched 2010 World Cup – in which he got England through the group stages by the narrowest of margins after a 1-0 win versus Slovenia (that’s right, Slovenia…) – Capello was, once upon a time, a stellar club level manager. Indeed, though Fabio has certainly not always been the most popular appointee among fans and owners (particularly those of Real Madrid), what he has done throughout his whole club level career is achieve results by guiding teams to trophies.

After all, during Capello’s first full managerial spell (ignoring his caretaker role in 1987) at the club he once played for, AC Milan, he created quite possibly the richest of representations for himself by winning four Italian league titles, three Italian domestic trophies and one Champions League. Not only this, but the club went a massive 58 games unbeaten between May 1991 and March 1993, a staggering feat for any manager to accomplish, let alone one who was presiding over his first tenure in football management. This was far from a one off though. Despite not being appreciated at Real Madrid, the fact remains that Capello has won two ‘La Liga’ titles from just two years of management at the club. As if this wasn’t enough, he also managed to win Roma the ‘Serie A’ title in 2001, the first honour for the club in over a decade. Ultimately, Capello was heavily reported as being the successor to Sir Alex Ferguson in 2001, but that was before Fergie’s retirement-that-never-was. The question is then, what caused everything to go so badly during his time with England, and – just last month – with Russia? We have discovered three possible causes.

While this is clearly the obvious answer for why any successful club manager fails internationally, it seems to resonate heavily with Capello because of the amount of signings he made at club level. After just one year at AC Milan, for instance, Capello broke the world transfer record by spending an estimated £13 million on winger Gianluigi Lentini. During the same summer, Capello signed another five high profile players that went on to make almost 500 appearances for Milan between them. This love of buying players is simply not possible internationally. Indeed, if his management of England is anything to go by, Capello makes a system before acquiring the players, something that may work at big-spending clubs where players can be brought to fulfil a manager’s vision, but cannot at non-spending international teams where you must accept who you’ve got. For example, Fabio built up the classic partnership of ‘one big, one small’ for his strike force when managing England, only to find that Emile Heskey was the one man who could fulfil the role of the bigger striker. Well, it was either him or Peter Crouch…

During the 2010 World Cup, England amassed a grand total of 3 goals from 4 games. Just last month, Russia garnered a similar total of 2 goals from 3 games. This, quite simply, is not enough. Though we could argue that this is because he hasn’t been blessed with good quality front men, the statistics largely testify against this. Indeed, both Aleksandr Kokorin and Aleksandr Kerzhakov of Russia had promising seasons before heading to Brazil. While the former notched 10 in 22 for Dynamo Moscow, the latter scored a tremendous 11 in 16 for Zenit St. Petersburg, a side that he largely didn’t play for because of their wealth of scoring talent. As for England, Fabio brought the attacking premise of Wayne Rooney and Jermain Defoe, both of whom had impressed with their club sides respectively. Fabio failed to get these players scoring when it mattered though. Whether it is because of the systems he has played is besides the point; at Real Madrid, Milan and Roma he managed to get his front men scoring regularly.

3. Capello suffers on the biggest stage

As an English fan, I’m completely aware of this deficiency. I and many other English fans have, for a long time, watched players perform excellently in the English Premiership before disappointing for the national side at the World Cup. It seems Fabio Capello isn’t immune to this either. The pressure of a nation on his shoulders is clearly something he doesn’t cope well with. After all, Capello did incredibly well at the Qualification stages with both England and Russia. Back in 2010, Fabio had got England to the World Cup Finals with a 90% winning record, losing just one of their qualification matches and conceding just 6 goals whilst scoring a massive 34. As for Russia, Capello guided them to the top of their qualification group, placing them above Portugal whilst scoring 21 goals at the expense of just 5. At the World Cup though, Fabio has won just one game in seven, earning 5 goals from his strikers and producing defences that have conceded 8 goals. When the pressure is stacked up on him, the Italian has crumbled on several occasions.

So there we have it, Fabio Capello is a managerial paradox. Despite acquiring nine titles (if you count the two Juventus were later stripped of) in just sixteen seasons of being a club level coach, the Italian has failed dramatically at international level, twice. Whether it’s the inability to spend, the pressure of the world stage, or just a simple lack of goals, Fabio Capello has proven how hard it can be for even the best managers to do well at the World Cup Finals.

This article was written by Christopher Montague, an aspiring full time Journalist who currently studies at the University of Exeter