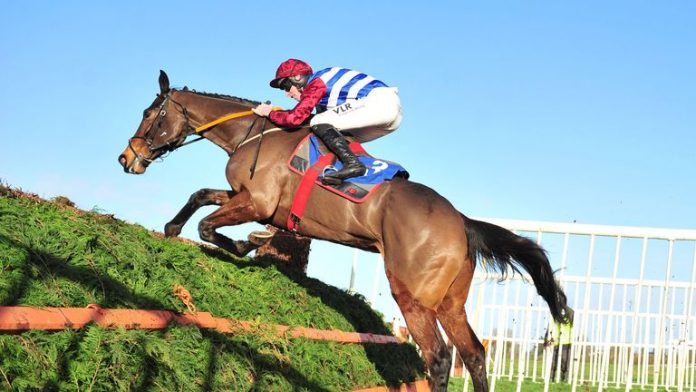 Escaria Ten is an exciting newcomer to Aintree for the Grand National 2022. A lightly-raced and unexposed Irish raider, he heads to Merseyside with hopes of a bold show after being well found in the market by punters.

Gordon Elliott needs no introduction to the Grand National after winning it three times already. Few trainers can even come close to his recent record in the Aintree marathon. On top of saddling Farclas to fifth place last year, he has two victories with Tiger Roll, a third and a second all since 2017.

This horse runs in the silks of Max McNeill and family. Unlike other big supporters of National Hunt horse racing, this is the only bullet these particular owners have to fire. Escaria Ten is the likely mount of the McNeill family’s retained rider Adrian Heskin. Their colours are blue and white hoops on the jockey’s body with a claret cap and sleeves.

Despite just one win in seven chase starts and no experience of the Aintree fences, there is plenty of market confidence behind Escaria Ten here. He went very close in the Bobbyjo, just getting chinned on the line. That hasn’t punt punters off and BetUK make this horse an 11/1 shot for Grand National success.

What Happened with Escaria Ten at Cheltenham Last Year?

Although a beaten favourite in the National Hunt Chase as a novice last season, Escaria Ten went down fighting. Only Galvin, who subsequently won the Savills Chase at Leopardstown and finished fourth in the Gold Cup, and Next Destination were too good for him that day.

Escaria Ten was just three lengths behind the winner then and home 14 lengths in front of Snow Leopardess, who has scored three times since. If the pair meet in the Grand National again, then they will do so off 1lb better terms for him from last year’s encounter.

That run at the Cheltenham Festival gives punters plenty of reason to believe Escaria Ten is a well-handicapped horse. He hasn’t won many races in his career but the assessor has to factor that in. Elliott does have plenty of others aimed at the Grand National but few have the scope for as much potential progress as this one.