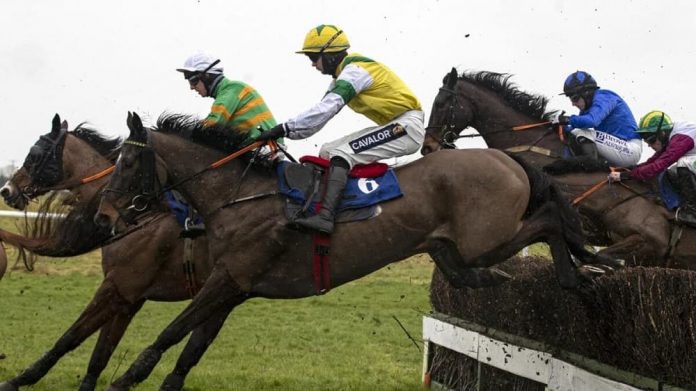 When a major racehorse owner purchased Enjoy D’Allen in the weeks leading up to the Grand National, bookies and punters alike paid attention. He brings some smart placed form in big handicaps in the Emerald Isle to the table.

Most punters probably haven’t heard of Ciaran Murphy but that didn’t discourage a notable change of ownership for his star horse. Based in Mullingar, County Westmeath in Ireland, he has no big race wins of note. Landing the world’s most famous steeplechase and the Grand National dream is very much alive.

Until March, this horse ran in the silks of the Railway View Stud Partnership. However, Emjoy D’Allen switched owners with JP McManus purchasing him with the specific aim of the Aintree showpiece. He will be far from the only one lining up on Merseyside in the famous green and gold hooped colours, though.

McManus splashing the cash to buy this horse speaks for itself. News of the purchase clearly influenced the ante post market. Enjoy D’Allen went from intriguing outsider from an underdog stable to a leading contender with BetUK going 12/1 about him winning the Grand National this year.

What Happened with Enjoy D’Allen This Season?

After finishing a fine third in the Irish Grand National last Easter, Murphy set Aintree as the aim for this season. That has meant two of the three runs in the current campaign coming over hurdles for Enjoy D’Allen in a bid to protect his mark. Far from disgraced when seventh over an inadequate trip at Fairyhouse on reappearance, he shaped far better in the Paddy Power Chase when tackling fences again around Leopardstown.

Beaten just three lengths off a 3lb lower rating in that graded handicap during the Christmas Festival, Enjoy D’Allen was again staying on well in the closing stages. He shaped in much the same way as he did in the Irish Grand National. Murphy has run him again over hurdles when fifth at the Dublin Racing Festival.

All temptation to run him again after the Grand National weights came out at a big meeting like the Cheltenham Festival have been resisted. Enjoy D’Allen goes to Aintree a fresh horse. Incredibly a maiden over hurdles, he has two wins and eight placed efforts in 10 chase starts never finishing out of the frame over fences.