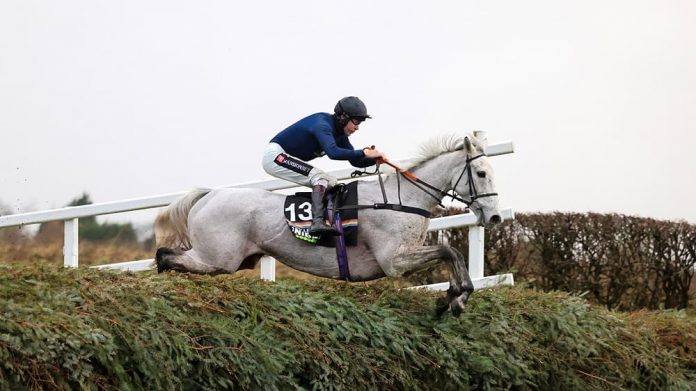 They say back a mare in form and Snow Leopardess with recent experience of the Grand National fences under her belt is just that. It would be something of a fairy-tale if she were to land the world’s most famous steeplechase at Aintree on Saturday, 9 April.

Oxfordshire handler Charlie Longsdon has taken care of this mare’s training both before and since she had a foal. It’s a heart-warming story of her returning to the track better than ever after giving birth and 794 days off.

The Fox-Pitt family silks aren’t seen on racecourses often. They have a greater association with other equestrian pursuits like Three-Day Eventing. With Snow Leopardess, they have had some great days in horse racing rather than Dressage and Show Jumping.

Unbeaten in all three starts this season including over the famous Aintree fences, it’s no wonder that Snow Leopardess is regarded as a leading British contender for Grand National glory. Although modified in the interests of equine safety in recent years, this is still a test of jumping as well as stamina. Snow Leopardess is a 9/1 chance with BetUK to win the big one.

What Happened with Snow Leopardess at Cheltenham & Aintree Last Year?

While she was no match for Galvin when fourth in the National Hunt Chase at the 2021 Cheltenham Festival, the mare has come back better than ever. Following a reappearance win at Bangor, Snow Leopardess took to the Grand National fences superbly when following-up in the Becher Chase before Christmas.

She badly needed the line but jumped superbly over the infamous obstacles. There is a question mark about her stamina, though. The Becher is over about 3m 2f with the Grand National a further mile in distance. This has been the target ever since, so the gutsy mare can’t be discounted.