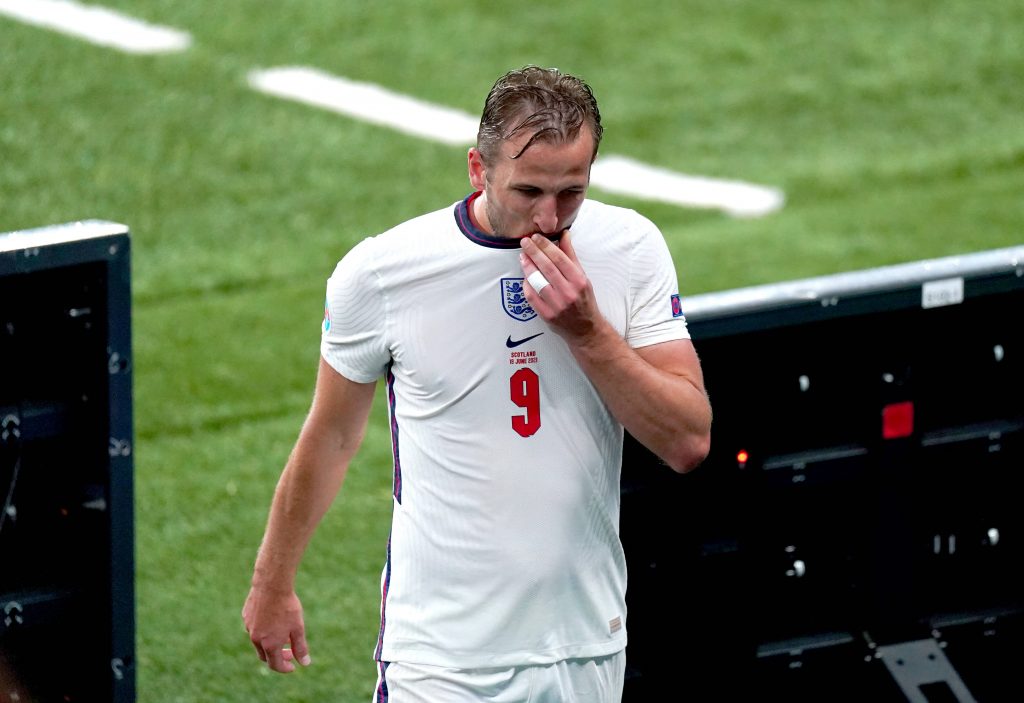 A selection of England fans were left frustrated with Harry Kane’s performance during last night’s 0-0 draw against Scotland at Euro 2020.

The Three Lions were overwhelming favourites to beat their neighbours at Wembley Stadium, but they struggled to dominate proceedings.

They ended up with just one shot on target over 90 minutes. The Scots fared better with two shots – one of them requiring a crucial diving save from Jordan Pickford.

Kane was disappointing for the second straight group stage game. He struggled to make his mark with centre-back Grant Hanley winning most duels against him.

The England captain ended up with just 19 touches of the ball and seven successful passes. He failed to register a shot on target for a second game running.

His latest performance angered some supporters, and here are a few reactions on Twitter.

What the hell is going on with Harry Kane??

He looks a shadow of the player we know he is. Is he thinking about his future? is he injured? Something just not right with him.#ENG #threelions #EURO2020

If Spurs manage to finesse a club for anywhere near £120 million for Harry Kane they’ve played an absolute blinder btw.

Everyone is talking about Grealish and I agree but no one is stating how poor Kane has been. He's clearly not fit. Hasn't touched the ball, and never in the box. #EURO2020 #ENGSCO #ThreeLions

The only positive from that #ThreeLions display is #ENG can't finish bottom of the group. So poor. Dull. Turgid. I've had that all season with #nffc and Kane looks no better than Grabban at the moment (and that's saying something). I just hoped for a little more joy #EURO2020

Kane has to step up on Tuesday. He's the captain, the spokesperson and the leader. Lead by example and hope the likes of Foden, Mount and Grealish can follow. That draw wasn't awful, but improvement has to follow.
Come on England. 🏴󠁧󠁢󠁥󠁮󠁧󠁿 #ThreeLions

Kane had an exceptional 2020/21 campaign for Tottenham Hotspur, registering a stunning tally of 33 goals and 17 assists from 49 games in all competitions.

He has looked a shadow of himself at the European Championships with just 17 successful passes and no scoring threat in the first two group games.

The Three Lions are assured of reaching the round of 16 but will need to beat Czech Republic next week to finish top of the group standings.

Finishing as the runners-up won’t be bad either as they would avoid the prospect of facing Portugal, Germany or France in the last 16 of the tournament.

A second-place finish could see them face one of Spain, Poland or Sweden.

Kane looked fatigued during the back end of the Scotland game, and he could be given a breather with Dominic Calvert-Lewin leading the line against the Czechs.