Martin Odegaard is a special talent, make no mistake about it. The 16-year-old Norwegian is already the youngest player to feature for his national side and is tipped to have a superb future ahead of him. The teenager has been linked with a host of European giants including Bayern Munich, Bacelona, Ajax Liverpool and Manchester United amongst others. However Spanish outlet MARCA have cited Norwegian outlet VG claiming that Real Madrid have won the race to sign the player. 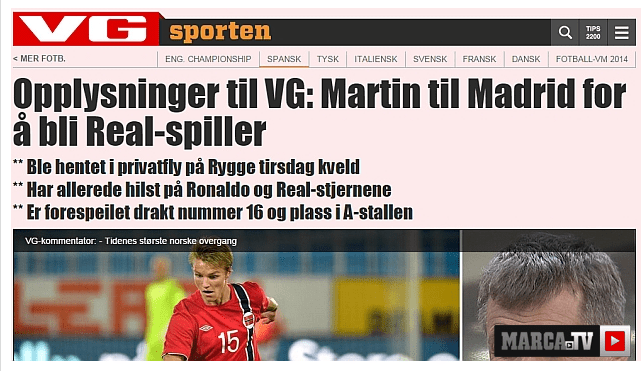 The report claims that Odegaard has boarded a private jet to Madrid to sign with reigning Champions League winners. The youngster who can play as a second striker or as an attacking midfielder is likely to be groomed by the Los Galacticos and there will be a long time after which he will get to play for the Bernabeu outfit. Odegaard already has five top flight goals to his credit in 23 games for his current club Stromsgodset.

Both Manchester United and particularly Liverpool will be disappointed to miss out on the special talent and willnow have to look elsewhere to nurture their famed academy prospects. Over the past few months, Odegaard was on a “Football World Tour” as he has trained with each of his potential suitors. It now appears that Real Madrid have the last laugh.