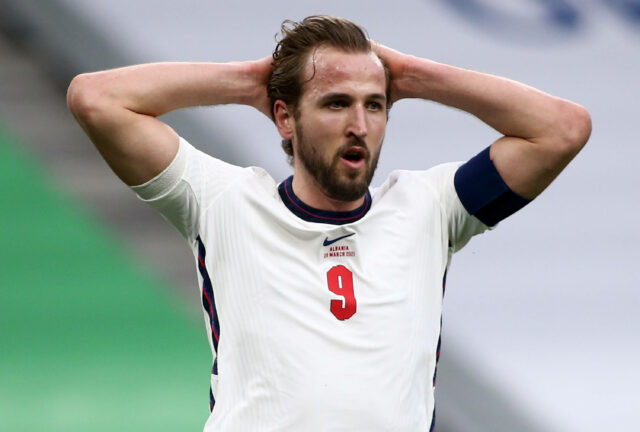 Harry Kane recently said that he doesn’t want to talk about his future at the moment.

The striker also added fuel to the fire by saying that he will think about his future after the European Championships.

Kane has a contract at Tottenham Hotspur until 2024, and the club are under no pressure to sell him.

However, the England skipper has been a great servant, and if he decides to move on Spurs would probably honour his wish.

He is one of the best strikers in the world. At 27, he is approaching the peak of his career, and several clubs would be keen to offer him a fresh challenge.

According to reports from the Daily Mail, both Manchester clubs, Chelsea, Real Madrid, Paris Saint-Germain and Juventus are keen to sign the Spurs striker.

Spurs chairman Daniel Levy will demand a fee in the region of £150 million for Kane if he does decide to leave.

The report claims that Levy won’t sell Kane to a direct Premier League rival. At the same time, the likes of Real, Juve and PSG would baulk at the fee given the financial implications caused by COVID-19.

Kane has been simply outstanding this season, reaching new levels with his more rounded displays on his way to bagging 23 goals and 17 assists.

Levy can call the shots as Kane has three years remaining on his contract. Tottenham will demand a full asking price and no players in exchange, and very few clubs in the world can afford to pay that amount at the moment.