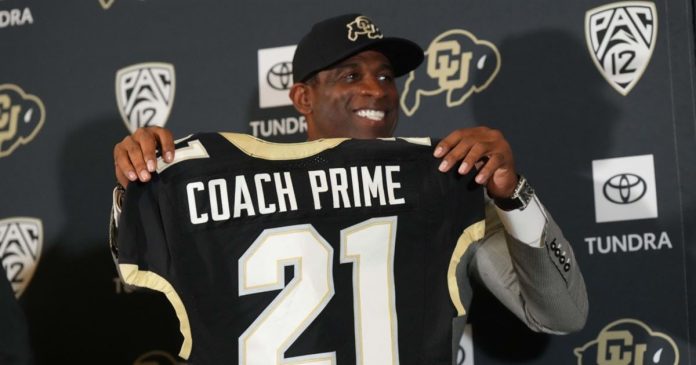 Deion Sanders was one of the hottest commodities in college football this year as several teams fought to name him their next head coach. The Colorado Buffaloes won the battle and ‘Coach Prime’ is now the head coach of a Power Five team. In a deal worth over $5 million a year, Sanders will leave his role at Jackson State to take over in Boulder. Sanders will now leave the HBCU in the SWAC to take over the worst team in the Pac-12.

Fresh off winning another conference championship on Saturday, ‘Coach Prime’ was appointed head coach of the Colorado Buffaloes. Deion Sanders has put HBCU football on the map, but now he will move on to a Power Five school when he takes over in Boulder.

Colorado believe it was worth splashing the cash to get their man. Coach Prime’s contract is believed to be worth over $5 million per year.

Deion Sanders has reportedly been offered a deal worth over $5 million per year from Colorado, with a significant package of contract incentives that could increase his annual pay by around 40% https://t.co/WTjqal7CZz

“There were a number of highly qualified and impressive candidates interested in becoming the next head football coach at Colorado,” Buffaloes athletic director Rick George said via a statement. “But none of them had the pedigree, the knowledge and the ability to connect with student-athletes like Deion Sanders.”

“Not only will Coach Prime energize our fanbase, I’m confident that he will lead our program back to national prominence while leading a team of high quality and high character.”

Sanders will take over from Karl Dorrell. Dorrell spent three seasons with the Buffaloes and went 1-11 in his last season with the program.

Colorado were near the bottom in every points and yardage metric at the end of the season. However, ‘Coach Prime’ could bring fresh blood in through recruiting and the transfer portal. His recruiting skills at JSU managed to land Travis Hunter, and the Buffaloes will be hoping he can attract that kind of talent to Boulder.

Colorado should feel like they won the damn lotto. At Jackson State, Deion Sanders went 23-2 last two years and got FBS-level recruits (and attention!) to an HBCU. I see no reason why it shouldn’t translate and I’m confused why bigger programs seemed to ignore him

JSU will play NC Central in the Celebration Bowl on December 17th. That will be Sanders’ last game in charge before taking over at Colorado.