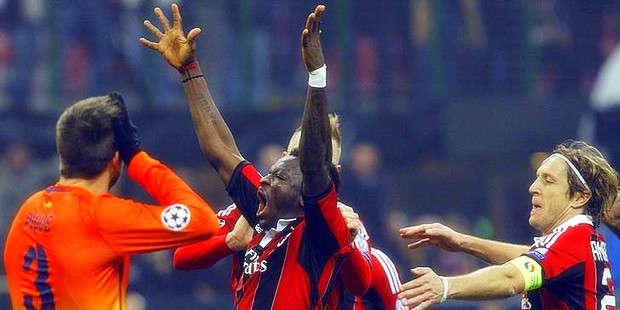 It was yet another fantastic European night witnessed by millions on Wednesday. Serie A outfit AC Milan pulled out a shock result as they defeated Catalan giants Barcelona at San Siro.

Former Portsmouth duo Kevin-Prince Boateng and Sulley Muntari scored for the Rossoneri which give them an excellent chance of knocking out the 2009 and 2011 Champions League winners.

The tie is far from over and we all know what the La Liga leaders are capable of. They can still turn the tide at Nou Camp, but there can be no doubt about the fact that heading into the second leg it’s the Italian club who holds a huge advantage.

Likewise, Real Madrid have a daunting task ahead of them when they will take on the Premier League leaders Manchester United who are aiming for the treble. The Los Blancos failed to win their home tie against the Red Devils and even they must know, getting victory at Old Trafford is easier said than done.

The moot point is, before the start of this season’s campaign, Barcelona and Real Madrid were heavy favourites to win the trophy and that favoritism didn’t change even after the knock out draws were made.

However, both the contenders are in an uncomfortable zone right now and might get knocked out in the round of 16 ties only. The so called under-dogs have performed extremely well and all credit should go to them.

The results also remind us that in football anything is possible, especially in knockout tournaments. Also, any teams don’t have to be the best team in Europe to win this prestigious competition as all they need is to perform better than their opponents over the two legged ties.

Will it be considered as shock if both the Spanish contenders get knocked out early? Will the critics foolishly compare one league with another saying the clichéd lines like “closing the gaps” and all that? Does it really prove anything?

Yeah, it does. That football is an unpredictable game and in any knockout tournament, expecting the unexpected is a common phenomenon.